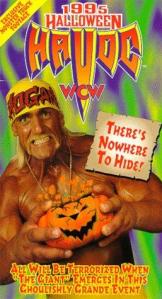 Recently we’ve revisited WCW’s Fall Brawl PPV and taken a look back at the Wargames match. As we head towards October I feel it only right to look at another WCW tradition which yielded many a gimmick match itself; Halloween Havoc.

I loved Halloween Havoc. Having a Halloween inspired show in the outrageous world of professional wrestling makes perfect sense to me. I’ve always wondered why WWE chose not to revive the concept. It may not be Vince’s own idea but that didn’t stop him using The Great American Bash name did it? Anyway, the event in question for this post is the 1995 instalment. To set the scene I should inform you that in 1995 we are still very much in the cartoon era of wrestling. The nWo is many months away and the main feud within WCW is Hulk Hogan’s battles with The Dungeon of Doom. This was a stable led by The Taskmaster Kevin Sullivan, under the tutelage of The Master. It comprised many weird and wonderful members over the course of its existence, most of which were actually ex-WWE wrestlers (i.e. Hogan’s pals) under different gimmicks. However the member with which Hogan had his biggest battles with, and whom he battles on this card, is WCW original creation The Giant. Better known to you and me as The Big Show, The Giant is as green as they come at this point. In fact his match with Hogan on this card is his first official televised match. That’s enough background; let’s have a look at this show –

Television Championship Match: Diamond Dallas Page (C) vs. Johnny B. Badd
These two had quite the rivalry, having seen a few events from around this time I can say that these two were no strangers to each other. Like their other efforts this is indeed a good quality match, and better still the fans were really into it. Ultimately DDP is made to pay for bringing his entourage to the ring as the atrocious Max Muscle accidentally hits him with a clothesline to help Johnny B. Badd pick up the win. Worse for DDP is that his lady friend, the Diamond Doll (aka Kimberly), was quite impressed by Badd’s victory, in fact she awarded him a perfect 10. That’s not a euphemism, she held up a number 10 for him, the lucky devil!

Macho Man Randy Savage vs. Zodiac
Ah The Zodiac Man, yet another one of Ed ‘Brutus Beefcake’ Lesley’s many gimmicks. He comes to the ring dressed as a zebra saying “yes, no, yes, no…” I suppose one could argue that Daniel Bryan owes him one. Zodiac is a member of the afore mentioned Dungeon of Doom by the way. The set up for this match is simple; if Macho Man and Lex Luger win their respective matches then they will face each other later in the show. That’s the set-up, now to the match; Macho Man wins, end of match.

Kurusawa vs. Hawk
This is the point in time when The Road Warriors weren’t tagging together; hence Hawk is going solo here. Here he is involved in a decent, hard hitting grudge match against Kurusawa, a guy whom I had never previously heard of. Kurusawa had supposedly put Hawk on the shelf after injuring his shoulder; here hawk attempts to exact revenge. Rather surprisingly this doesn’t happen as Kurusawa uses the ropes for leverage to pick up the win.

Sabu vs. JL
A rare appearance by the masked Mr JL here. Fans of the original ECW will dig this match because Mr JL is actually Jerry Lynn. This was a brief and forgettable encounter which Sabu won.

Promo by The Master and The Taskmaster. From what I could make out from The Master’s incomprehensible shouting the planets have aligned and The Yeti is going to bring about the end of Hulkamania, scary stuff!

Lex Luger vs. Meng
Same stipulation as with Macho Man’s match, defeat a member of The Dungeon of Doom and the match is on. Problem is Meng is a much stiffer (pun intended) challenge than Zodiac. To make things harder Taskmaster Sullivan accompanies Meng to ring side. Meng looked to have things wrapped up after hitting Luger with a golden spike but Sullivan came in and stopped the three count, handing the DQ win to the Total Package. Sullivan tries to calm Meng down, as it appears that this is part of a bigger plan..

Arn Anderson & Brian Pillman vs. Ric Flair & Sting
Sting should really have known better here. Apparently before the PPV went on the air Pillman and Anderson did a number on Flair, thus rendering him unable to answer the bell at the start of the match, meaning Sting would have to go it alone. However, the courageous Flair did make it to the ring, bandaged head and all, as the match was in progress. As a battered Sting made the hot tag Flair burst into the ring, strutted, styled and profiled before nailing The Stinger. Yep, it was a set-up all along. What else would you expect from the Horsemen and the dirtiest player in the game?!

Sumo Monster Truck Match: Hulk Hogan vs. The Giant
You read that right, digest those words and picture the match in your head because that is exactly what happened. Plus they held the match on the roof of the arena! This match was pure self-indulgence for Hogan and his bike and truck loving mates. This is how the match works; you take two monster trucks, put them in a giant circle, join them together using a bar of some sort with aim to push your opponent out of the circle. Yes, this really happened, it was crap and Hogan won. Better still, after the contest was over both wrestlers got out of their trucks to exchange words, one thing led to another and The Giant fell off the roof. Honestly, I’m not making this up. Back in the arena Tony Schiavone and Bobby Heenan are doing their best to appear confused and shocked, which I’m sure wasn’t too hard following that angle. Anyway, on with the show….

Randy Savage vs. Lex Luger
Wouldn’t it have sucked had one of them not won their previous match and this bout would never have taken place, but of course that was never going to happen. It’s not entirely clear what the beef is between the two, just that there is tension caused by them both being contenders at the top of the card. The match itself is fairly forgettable given the angle that preceded it. Savage won with the big elbow.

WCW Championship match: Hulk Hogan (C) vs. The Giant
You would think that The Giant might not be up to facing the Hulkster having just fallen off the roof, nope! He has his wrestling gear on and he’s ready to go. No explanation is given, only that he’s The Giant and he’s from the spooky Dungeon of Doom, works for me. Incidentally Hogan is sporting a new look. To get in touch with his dark side he is wearing all black, not too dissimilar from his nWo gear and he’s also sans moustache. It’s weird seeing him without the soup strainer but it got the chop while he was filming a movie around this time. Back to the match and it’s slow, pondering and pretty dire, in line with most of Hulk’s matches at this time (or one could argue all the time). The real story is in the developments within this match. Firstly just as Hogan slams the Giant and hits the Leg Drop of Doom the ref takes a dive. The culprit? Hogan’s manager Jimmy Hart. While Hogan is still trying to figure out what happened Hart nails him with the megaphone. As an aside it’s worth looking out for The Giant (who’s working his first match remember) constantly looking up to see what’s going on rather than selling the leg drop. Next The Taskmaster heads into the ring to put the boots to Hogan. Never fear though, here comes Luger and Savage to save the day, oddly encouraged by Hart who has just turned heel. However Luger takes this opportunity to turn heel on Savage, which is almost missed by the cameras and brushed over by the commentators as The Yeti makes his entrance. The Yeti looks like a giant Egyptian Mummy, and giant is right, he’s even bigger than The Giant. By the time this, erm, interesting looking chap, makes it to the ring Luger is stomping on Savage and Giant has Hogan in a bear hug. The Yeti joins The Giant and they perform a double bear hug thing. It looks less like wrestling and more like these two large men are dry humping Hulkamania into submission. The referee then comes around and disqualifies Hogan (because Hart is still technically his manager) and awards the title to The Giant. Apparently the title could change hands on a DQ in this match.

So that was Halloween Havoc ’95.It was certainly interesting, you will have never seen anything like it before. Actually, some of the wrestling isn’t bad and the Hogan/Giant fiasco is one of those things that you have to see to believe. Give it a look, there’s worse events out there.