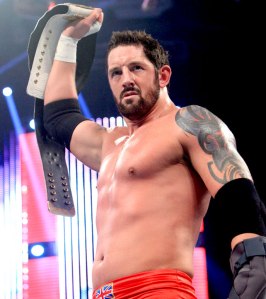 Barrett: He may be Intercontinental Champion but way he is booked leaves a lot to be desired.

Sunday night’s Royal Rumble event really got me thinking more about the strength of the WWE roster. Few will doubt the number of very over good guys the organisation has but the same cannot be said for heels on the roster, strong and over heels are few and far between. Take the results from the show, bar the pre-show victory for Cesaro, every match so the faces triumph from Kane and Daniel Bryan beating Rhodes and Sandow, Alberto Del Rio besting The Big Show, The Rock triumphing over Punk and of course Cena reigning supreme in the Rumble match.

Another example is the Rumble match itself. That match ended with the following five competitors in the ring: Dolph Ziggler, John Cena, Ryback, Randy Orton and Sheamus. Four of the final five Rumble competitors were faces with only one heel in that mix. Does that not say it all? As far as I am concerned this is a microcosm of everything that I feel is wrong with the current WWE product. Not only are there very few top heels, those that are heels struggle to look impressive and regularly find themselves on the receiving end of defeats at the hands of the promotion’s good guys.

So, who are the WWE’s top heels, in terms of full-time talent? Unquestionably CM Punk is the number one bad guy in the promotion and is joined on the list by The Big Show, Wade Barrett and Dolph Ziggler. Brock Lesnar is undoubtedly a huge draw as a heel but works only a limited schedule and, although returning as a face, a Jericho heel turn cannot be far off but he’s only contracted until around Wrestlemania 29 time.

Many, myself included, had anticipated that Ziggler would be the stand-out performer of the Rumble match. How wrong we were. His elimination count amounted to two: Chris Jericho and The Godfather. Generally viewers were treated to Ziggler doing what he does best, i.e. selling but in a Rumble environment that generally looked more like hanging on desperately to avoid elimination rather than looking strong in the ‘iron man’ role.

Current Intercontinental Champion Wade Barrett is another one of the WWE’s big heels but the fact that the plans for his next feud appear to revolve round ‘The Intercontinental Cup’, a tournament hosted on WWE Main Event, doesn’t bode well for him. His battle with Bo Dallas, stemming from the NXT star eliminating him from the Rumble, is interesting in the classic ‘rookie v established star’ mould but is not going to take Barrett to the next level.

What is more surprising still is that in the past few months the WWE have turned both The Miz and Alberto Del Rio face, albeit to quite contrasting levels of success. Since his turn The Miz has found himself in obscurity amongst the land of faces that is the WWE locker room and leaves this writer wondering exactly what the point of that turn was.

It increasingly seems less and less that heels in the WWE are allowed the opportunity to win and look strong in the process. The company needs to do a much better job of building up heels and allowing them to establish some measure of credibility.