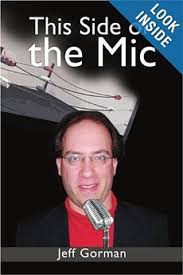 It was back in 2004 that TNA introduced “Gut Check” as a means of recruiting new talent. The company changed the former slightly last year with those involved receiving a try out match on Impact Wrestling. Since then numerous performers have competed for the opportunity to wrestle for TNA.

Jeff Gorman, though, has a different aim. He may well be campaigning to be part of Gut Check but the man that has called the action for Ring of Honor, Chikara as well as being a MMA specialist and sportscaster of 19 years is aiming to be the first announcer to be part of the talent search.

It is from a strong pedigree that the Ohio native sportscaster comes. After all, he was involved in 10 of the first 50 Ring of Honor shows most notably calling the debuts for that promotion of CM Punk, Samoa Joe and Colt Cabana. But what exactly has prompted the 19 year veteran of sportscasting to launch the #makeroom4Gorman campaign to be part of Gut Check.

“It’s not easy getting a job on national TV announcing professional wrestling. It’s about as easy as getting on the U.S. Supreme Court,” joked Jeff. “So, when the Gut Check Challenge started, I knew that was the answer. I’ve challenged TNA every month since it started, first on Twitter and then with the YouTube videos. I knew it would be a long wait, since they have a lot of wrestlers they want to see. But it would make so much sense for them to try out an announcer as a change of pace, and I’m ready to be that announcer.”

You can’t question the drive of his campaign but are Dixie Carter and co at TNA headquarters actually listening? Happily, it seems that they are in what must come as a relief to him. With every good campaign there is a goal and that is to be part of Gut Check at TNA’s show in Cleveland on August 29, a city that has a special appeal for him. In fact, the city hosted an event he’d have loved to have announced on.

“Yeah they recently told me they are aware of me. That’s a relief, because you never know if people are seeing your work unless they tell you that they are,” he said. “Also, the @TNAGutCheck Twitter feed is following me, and they only follow 56 people. Right now, I’m specifically asking to do Gut Check on the Cleveland show on Aug. 29, because that’s my hometown arena.”

As for the event he wishes he’d had the chance to call, well, that may surprise many wrestling fans. “I would have loved to call the WWE Invasion pay-per-view,” states Gorman. “Not only was it a historic clash between WCW and the WWF, but it look place in Cleveland. That would have been an amazing highlight to my career.”

However, those that follow the TNA product or even wrestling generally may be less surprised by his event choice and more surprised by his drive to be part of Gut Check. His campaign comes as numerous former winners have seen their contracts terminated by the promotion as part of their cost cutting drive. But that’s not derailed his campaign one bit.

“It’s hard to ignore the releases but I’m not giving up,” states the defiant announcer. “If I got a shot to announce an entire show, I would show them that they need me. That’s my challenge to them, but it’s mostly a challenge to myself. I have to knock the ball out of the park on my first swing of the bat. I know I can do it, because I did it in Ring of Honor and I did on the Moosin MMA pay-per-view.”

It is clear that he is up for the challenge and based on his announcing experience and CV, that’s hardly surprising. It was back in 1994 that a 23 year old Jeff Gorman made his tentative steps into wrestling announcing. After graduating from Northwestern University, where he announced baseball, including Northwestern’s appearance in the Big Ten playoffs, he covered Wildcats basketball and football, as well as the Virginia Slims pro women’s tennis tournament. It was, however, with American States Wrestling Alliance that he first got behind the mic to call action in the squared circle.

“I didn’t even know that the ‘independent wrestling scene’ existed until I was 23; otherwise I would have started a lot sooner,” laughs Gorman. “I’ve loved wrestling since I was 15, but I always assumed I would announce baseball and football, which I’ve done. However, something about announcing wrestling really clicked. I think just about anybody can call a baseball game, but not everyone can announce pro wrestling.”

He followed up a stint with American States Wrestling Alliance with spells working for the top two promotions in the Pittsburgh area, Steel City Wrestling and its successor, International Wrestling Cartel. It was then off to Chikara, Far North Wrestling and APWF 2000 before making his way to being behind the commentary table for Ring of Honor where many of his career highlights to date occurred.

“As far as favorite moments, I was really proud to call Low Ki vs. Samoa Joe at ROH Glory By Honor, because that was rightfully considered one of the best matches of the decade,” reflects Gorman. “CM Punk vs. Eddy Guerrero in IWC Pittsburgh was a hidden classic. I’m also very proud of my work in Firestorm Pro Wrestling in Cleveland. I called the play-by-play over the mic to the live crowd, which could have been a total train wreck, but I was able to make it work and give the promoter the ‘TV feel’ that he was looking for.”

“However, my absolute favorite moment was at ROH Revenge on the Prophecy in Pittsburgh, which was my first time ring announcing for ROH. The fans in Pittsburgh knew I had worked for eight years to reach that level, and they cheered for me before the main event. That was a beautiful thing.”

Many modern wrestling fans seem keen to put the boot into the current product all the way from the lack of violence, the people carrying the straps right down to those calling the action but the man who is hoping to join the commentary team on TNA would prefer to discuss the men that influenced him rather than criticising. Although he is frustrated by the errors from certain commentators when it comes to describing the action. In fact, the rise in miss calling of moves has seen him launch a series of YouTube tuition vidoes.

“I have my own style and I don’t pattern myself after other announcers, but Gorilla Monsoon and Joey Styles are my two all-time favorites. They both knew all the moves. Gorilla knew how all the moves WORKED on the body parts, and he was a great advocate for the babyfaces. Joey was amazing at showing how ECW was different from WCW and WWF, and he let the fans know that this is the show they had to watch,” stated Jeff Gorman.

“I am up to three Commentary Class videos. They are all on my YouTube channel, “TheJeffDGorman.” I can’t rip on any one announcer, because many of them are repeating mistakes that they’ve heard over the years. My goal with the Commentary Class series to establish myself not just as great announcer, but as a teacher and a leader.”

“I would love to establish Manhattan Drop as the accepted name for an inverted atomic drop and eliminate the word “Side” before “Russian Leg Sweep.” I also would like for my inventions: the “Phantom Audio Tag” and the “Defensive Dropkick” to be in every announcer’s playbook.”

“However, my next Commentary Class will not be about the names of moves, but how an announcer can break out of the pack and be considered great. I’ll talk about being the voice of your brand and a supporter of the babyfaces, which I think a play-by-play guy should do, because it establishes the legitimacy of the company and of pro wrestling in general.”

The impression that Gorilla Monsoon has made on Jeff is clearly evident but how much emphasis he plays on psychology and the classic storytelling aspect of wrestling and the vital role a commentator plays in getting that story out there. It’s perhaps one of the areas where he believes that TNA can be found lacking at times. But that does not mean he’s critical of Mike Tenay and Taz who call the action for the promotion.

“I think guys like Mike Tenay and Tazz as well as Michael Cole and the other WWE guys are all doing a fine job,” stated Jeff. “In fact, my challenge would be a lot easier if they weren’t. That’s why I have to prove to everyone that I have a special talent and can go down as one of the all-time greatest wrestling announcers.”

“I listen to the commentary very meticulously, and I don’t think anyone is really doing a bad job. I’m always thinking, “What would I say differently that would be so good as to make them hire me?” Fortunately, I come up with a lot of things. Sometimes, it’s just the name or pronunciation of a wrestling move.”

If you think his passion lies solely in announcing and campaigning to be part of Gut Check then you’d be wrong. A 19 year veteran of announcing he may be in a career littered with great moments. While that may be a dream come true for many, it’s not the one that he mentions.

“Being a husband (11 years) and a father (10 years) is the most rewarding thing in my life. That’s the theme of my book, “This Side of the Mic,” which talks about my announcing adventures and shows how having my own family became the biggest “dream come true,” states the proud Father but it’s not all that is keeping him occupied.

“I’m announcing MMA for Explosive Fight Promotions in Akron, Ohio, and I’m writing for Indians101.com and Browns101.com. My wife and I home-school our daughter and our dream is to take her all over the United States.”

Jeff available to take the Gut Check Challenge any time, but Aug. 29 in Cleveland would be ideal. If anyone else wants him to call any sport, they can e-mail him at jeff@mmaspecialist.com.