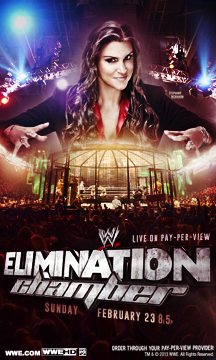 FOR American based grapple fans tonight’s Elimination Chamber may be the final WWE PPV they will ever buy for a while with all content then going onto the much hyped Network. The card will be headlined by WWE Heavyweight Champion Randy Orton defending his strap against Daniel Bryan, John Cena, Cesaro, Christian and Sheamus within the confines of the Chamber and Rumble winner Batista will face Alberto Del Rio.

Elsewhere, The Shield will clash with The Wyatt Family in a six-man tag match, Big E will put the IC title on the line against Jack Swagger, The Usos will challenge Tag Champs The New Age Outlaws, Titus O’Neil will take on former partner Darren Young and Cody & Goldust will face Ryback and Curtis Axel in the pre-show. Here is our preview and predictions for the show.

Craig: I can’t help but think that the WWE would have been better of splitting Cody and Goldust up rather than have them fight filler matches on the pre-show against going nowhere teams like Ryback and Curtis Axel. In fact, isn’t it about time they just admitted defeat with Axel as well? This screams dud to me.

Winner: Hell, despite what I’ve said about Axel and Ryback.

Brian: Another pre show match for Cody and Goldust? Was the Miz not available? Obviously, there will be another miscommunication between the brothers to further their storyline going into Wrestlemania 30.

Jamie: I’m gonna go for a ‘Rybaxel’ win, purely because I can’t believe WWE would let a team as over as Cody and Goldy slide into mediocrity by accident. There must be method to the madness…

Russ: Well I think the die is cast for the Rhodes boys, twice in a row they have been on the pre-show. I would suggest they are going to be broken up in the not too distant future. Curtis Axel has been on the back burner a while and Ryback needs to get some of his reputation back. I think we can see a pretty comfortable win for Ryback and Axel, possibly moving up to contenders for the tag title??

Craig: Hardly the pay-off to the breakup of The Prime Time Players that I expected. They’ll get 5-10 minutes or so but then what? Do the WWE go full tilt with Titus? He’s certainly got the look you’d normally associate with someone that’d get a push. Time will tell. It’s probably going to be Darren Young that will be the loser here – both in this match and going forward.

Brian: I will never understand why they broke up this fun tag team. It seemingly came out of nowhere and makes little sense. I know Titus is the focal point…but I see an upset here.

Jamie: Titus O’Neil wins, right? He appears to be the one receiving the push, although my money is on Darren ‘Mr No Days Off’ Young having the more prosperous long term future.

Russ: I like Darren Young, but I can see Titus O’Neil getting more plaudits and a push short-term.

The Shield v The Wyatt Family

Craig: This is what I’m talking about and I’m very excited about this one. I’ve wanted to see these two groups go at it for a while. The build-up to this has been fantastic with in-ring stuff to a bare minimum –ideal hype for a match. But what happens on the night; do The Shield disintegrate as has long been expected or do they go over here? Either way, this will be a great match.

Brian: As the late Gorilla Monsoon use to say, “Bury down the hatchets…” This is perhaps the biggest selling point to this pay per view. It has all the makings of being a show stealer and right now, it makes more sense for The Wyatt Family to win. I don’t expect the Shield to split up here, but I do expect something to happen that will be the catalyst for the ultimate meltdown for the group.

Jamie: This is a Wrestlemania calibre match. I figured WWE were booking it at Elimination Chamber so they could use the actual Chamber and have a War Games-esque match, but no. One thing is a lock though, Roman Reigns will be booked to look as strong as possible. I Think either he wins or Ambrose loses. I’m going to opt for Reigns winning, and Ambrose getting even more jealous. Reigns will pin Harper or Rowan, thus Bray will be protected somewhat.

Russ: Should be a good match, surely this would have been better at Wrestlemania with the growing dissension in the ranks. I think this might be the last match The Shield have as they are now. Wyatts should win as they are stable and continue on their way. Will we see the Shield disintegrate before our eyes?

Craig: Batista does nothing for me. Was never into him when he debuted originally and his return does even less for me. When you add Del Rio into the mix, another guy I’ve never liked that much, then this match isn’t one I’m fussed about.

Brian: Aside from the Montreal Screw Job…I can’t think of another time off the top of my head where one wrestler generated so much legitimate heat. CM Punk quit…Alberto Del Rio has reportedly threatened to follow Punk and not resign all due in part…to the return of “The Animal.” With that said…this is nothing but a tune up match for Batista to shake off the ring rust.

Russ: This is just a filler to make Batista look good. Rumours running rife about Del Rio leaving WWE soon, so I can see WWE preparing for it by doing as they do best, making Del Rio look hopeless.

Craig: Based on Usos getting the pinfall in the 8-man on Smackdown and Jey’s win over Gunn on Raw I can’t see any result here other than The Outlaws leaving with the tag titles.

Brian: To me, the New Age Outlaws were nothing more than transitional champions. They are more retired than active seeing as they are trainers/road agents. This is finally the Usos time.

Jamie: For me The Usos are nailed-on to win the titles in the near future, but will it happen here or will it happen at Wrestleania? Purely because they would be struggling for challengers should they head to ‘Mania as champs, I’m going to say that The Usos don’t win the titles at Elimination Chamber. The Outlaws will likely cheat to win this one, thus setting up a rematch.

Russ: Interesting match, I really can’t see NAO loosing out here. OK they are not in their prime anymore, but it would make more sense for them to loose it at Wrestlemania. Usos will come out looking pretty good despite the loss.

Craig: First of all, good on the WWE bothering having a four man match to crown the number one contender for the belt rather than just throwing a superstar into a title match. It makes it seem far more important and that can only be a good thing. Additionally, Swagger is definitely the right guy – out of the four man that saw him, Rey Mysterio, Mark Henry & Kofi vie for a title chance – to face Big E. These two should deliver a good enough 15+ minute match.

Brian: I hate to use a Twitter reference, but lets see whose pushes are trending and whose is not…

Jamie: Big E will win this. I can’t think of a single argument to support the notion that Swagger might win.

Russ: Jack Swagger has become a bit of a joke figure these days. Good wrestler, but he has been off the top table for a while now. Big E. will continue on his run, so I can’t see this finishing any other way.

Craig: I’m genuinely curious to see what the WWE do here. Do the company look to cash-in on Daniel Bryan’s appeal and use the Elimination Chamber bout to squeeze him into the Wrestlemania main event? Or is the finish more obvious with Orton retaining here and going on to face Batista in a one-on-one match on April 6 th ? A one-on-one match is my preferred option for the main event and I think Orton’s came out that well from the matches he’s had against the other five recently that he’ll go over on Sunday night.

Brian: This match is intriguing considering the defection of CM Punk. Does Randy Orton retain? Absolutely…but something will happen or someone will screw over D-Bry yet again….

Jamie: You know what’s shocking? This match is for the WWE Heavyweight Title, it will determine who headlines Wrestlemania and it features Daniel Bryan. Yet, I couldn’t care less about it. Let’s face it, Christian, Sheamus and Cesaro aren’t in the running here. John Cena is always in the running, but by booking him against Batista WWE would be grouping two of Wrestlemania’s ‘selling points’ together. He also won the title last year and is likely to face Bray Wyatt this. That leaves Bryan and Orton. Problem is Bryan has this side story with the Authority and the likelihood of Kane interfering. That leaves Orton as the logical winner. Orton has also been booked to look really weak recently, a sure sign that he’ll be winning here.

Russ: With Wrestlemania within touching distance, I think it is fair to say that Sheamus, Cesaro and Christian simply aren’t going to win this. Daniel Bryan is the current flavour of the month, so he is a big draw. Randy Orton is the champion and then you have John Cena. Can you really see Wrestlemania 30 not being headined by the biggest star in the company?? Interesting thought. I am really intregued to see how this plays out. Decisions, decisions….

Craig: It’s a pretty solid event as you’d expect for the last show before Wrestlemania. Plenty to keep everyone interested as well. Six-man tag is the match I’m most interested in but also keen to see how Big E. and Swagger get on and, of course, the main event.

Buy/Not buy: Buy as it’ll fill in a few more blanks ahead of Wrestlemania 30.

Brian: I think this will be a solid show…the last pay per view before ‘Mania…I see some story lines finally coming into fruition.

Buy/Not Buy: I’m passing on this one…burned too many times the last year

Jamie: I’m not into this card at all, it reeks of predictability. I should be excited to see Daniel Bryan (and Cesaro) challenge for the title, but I have no faith in WWE at the moment. The six man should be good, but that’s about it. Hey, I may be wrong and Elimination Chamber could be an absolute cracker with surprises and shocks all over the place. However, based on the build up, I have absolutely no inclination to spend any money finding out if I’m right or wrong.

Russ: Shield v Wyatts is the match of the card. I know Batista needs a match to keep his hype up, but the choice of opponent has a lot to be desired. I would have put Batista in a match with Sheamus, with Del Rio going in the chamber. Winner of the main event is obviously key going into Wrestlemania.

Buy/Not Buy: Not buy, too many fillers and it isn’t particularly strong for me.