There was a time in wrestling when you knew the difference between the good guys (baby faces) and the bad guys (Heels) A time when fans hated the chicanery of a really well played heel. They had the ability to not only make you hate them…but root for any baby face willing to stop them. A great heel could cause a riot in an arena. A great heel would need 24/7 security because angry fans would try to cause them bodily harm. They’ve been spit on, garbage thrown at them…even stabbed. That was the essence of a great wrestling heel from yesteryear.

Then it all changed….suddenly villains became cool and trendy. It became more socially acceptable to cheer for their rule breaking ways and in fact…encourage them to do so. Fans would buy their merchandise, repeat their catchphrases and give them thunderous ovations as they entered an arena. What happened? When did it all change? Are their any real old school heels left? 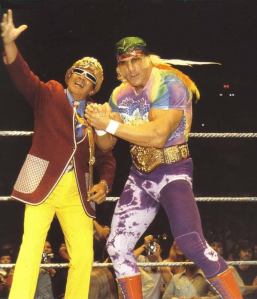 I realize the business of professional wrestling has changed and adapted with the times. I’m not trying to hang on to the old guard and refusing to adapt. There was something to be said about the great heel wrestlers from days gone by though. They were in fact…best for business. Why you ask? People historically love to see someone get theirs in the end. A heel champion is more beneficial to long term success than a face champion. People will pay to watch the chase for gold rather than good always triumphing over evil every night. Perhaps in some regards…wrestling should return to the classic heel competitor. The real, true bad guy that people hate with passion.

Once of the true beloved baby faces in all of wrestling…Ricky Steamboat…saw the trend turning in 1989 in his classic series of matches with Ric Flair. He said he noticed more people cheering for Ric Flair and he getting more boos. Steamboat attributed it to him bringing out his wife and son before his matches. He looked weak and soft…while Flair came out with a beautiful woman on each arm…in flashy sequined robes…strutting to the ring. People wanted to be like the player Ric Flair…not the family man Ricky Steamboat.

Back in the day, when a promoter got a sniff that a heel was gaining in popularity…he would be turned into a baby face. Now a days, heels are more acceptable to be in a gray area. They come with their own merchandise, catchphrases and hand gestures. The cool heels like the nWo were or The Rock was replaced the baddest of the bad guys. Is it cyclical? Will true heel ever return? Are there any true heel left?

I look at guys like Randy Orton and Brock Lesnar who play perfect, old school heel characters. Wrestlers who don’t care for the cheers when they are introduced…as a matter of fact encourage booing. CM Punk played the classic heel for a majority of his long WWE title run and despite some cheers from fans…kept to the formula.

I don’t know if the days of heels as straight villains will ever return to pro wrestling. The days when a heel would take the microphone and by his words alone cause chaos. The days of pulling tights to get a pin fall. The days where illegal objects came from their tights or use an illegal maneuver when the referee’s back is turned. When cheering heels is a cool thing now….I wonder if fans really know what their missing.

2 thoughts on “Cool Vs Evil: Will The Real Heels Please Stand Up”