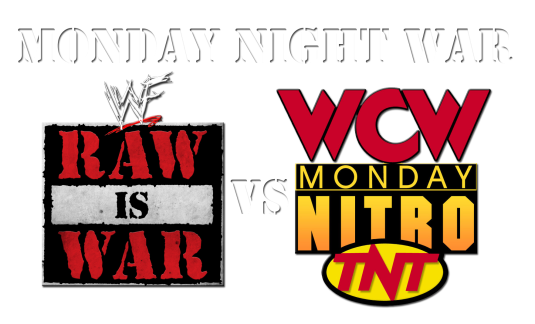 ‘Monday Night Wars’ continues with the episodes of Raw and Nitro from 28 September 1998. It’s the Raw after Breakdown and we’re set to hear from Vince McMahon over the future of the WWF title. Over on Nitro the main event was Hollywood Hogan v Bret ‘The Hitman’ Hart.

All this and more as Monday Night Wars continues… 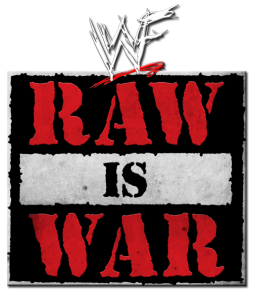 It’s the day after WWF Breakdown which saw The Undertaker and Kane both pin the WWF Champion Stone Cold Steve Austin. Raw starts with Vince McMahon coming out to the ring with the title belt over his shoulder. He’s accompanied out by Sgt. Slaughter, Gerald Brisco, Pat Patterson, and eight security officers. McMahon states that this very night a new WWF Champion will be crowned. McMahon took off his jacket and Slaughter wrapped Stone Cold Steve Austin’s smokin’ skull title belt around his waist. McMahon stood on the corner turnbuckle and raised his arms in the style of Austin.

Jim Carrey is due to appear but Lawler said he hasn’t yet shown up but if he savagely attacked Carrey like the papers said, Carrey would still be in the hospital.

Tag match to kick things off as Southern Justice challenge the tag champs The New Age Outlaws. A short match ended with a DQ finish with Road Dogg drilling a member of Southern Justice with Jeff Jarrett’s guitar. A shoving match ensued between the champions until X-Pac and Triple H both attempt to play peacemaker before Gunn storms to the back.

Owen Hart and Dan Severn then went to a non-finish when the referee rang the bell when Severn complained that he couldn’t feel his arms. Seems the WWF are making a storyline out of the injury Austin suffered at the hands of Hart last summer.

The jobbing of Vader continues as he loses to Al Snow, after Snow hit him with Head while Slaughter – who was there to make sure Snow didn’t use Head – inadvertently distracted the referee.

Six-man elimination match next up to crown the number one contender for the European Championship. Former Champ D-Lo Brown is in this with Jeff Jarrett, Gangrel, Marc Mero, Droz and Edge. Gangrel is eliminated first by Edge, Jarrett and Droz are then counted before Mero is eliminated. Edge and Brown are the last two involved and D-Lo gets the win when Gangrel and a fan distracted Edge, allowing Brown to hit the ‘Sky High’ for the win.

Outside we see police stationed to prevent Austin from getting into the building. McMahon made his way out stood in front of a glass cage with the old WWF Title belt inside. He then introduced Undertaker, then Kane. JR said the new champion would be either Undertaker or Kane since they both pinned Austin. McMahon said both Undertaker and Kane deserved to be WWF Champion but Austin broke through a fence blocking the entrance to the arena in a zamboni. He stormed the ring, tackled McMahon with a flying clothesline off of the zamboni, and was immediately handcuffed and restrained. Stone Cold got in a few stomps on McMahon while he was being dragged away. McMahon limped after Austin, yelling, “You go to jail, you son of a bitch!” As he was shoved into the backseat, Austin said, “I’ve done this before.” McMahon gave Austin the finger and yelled, “Let him go! Yeah, bring him on!”

After the break, Vince returned to the ring to scold Undertaker and Kane for letting Austin attack him three times in the last week. “You didn’t live up to your end of the deal, I’m not going to live up to mine. You’re gonna have to fight for it.” McMahon announced that at Judgement Day the two will face each other, with Austin as referee. He then announced that the Undertaker & Kane would team up to take on Ken Shamrock, Mankind, and Rocky Maivia.

Faarooq pinned Mark Henry in just over a minute thanks to a very quick count from the special guest referee, Chyna. We cut backstage to where McMahon is being loaded into an ambulance. Another promo then airs for Steven ‘Real Man’ Regal.

Val Venis then took on the WWF European Champion. A good, albeit short, match that ended in a DQ finish when X-Pac and Chyna double teamed Val. Val was accompanied by Terri Runnels and as they started groping each other, Goldust’s music began playing. Dustin said, “Val, I told you he was coming back.” Golden specks of dust fell from the ceiling.

Rocky Maivia, Mankind and Ken Shamrock then faced Kane and the Undertaker in the main event. Crowd were super into this one with Rocky getting the win over Taker, after a Rock Bottom, just shy of thirteen minutes.

Nitro was in Rochester, New York, this week. That being WWE country, Tony Schiavone made sure to use the term “Nitro has taken over New York” whenever possible. Anyway, here’s what went down…

Hollywood Hogan came to the ring and put himself over; he even called himself “Wood” and “Woody” for purposes of innuendo. He cut a promo on Warrior and challenged both Bret Hart and Sting.

Receiving a taste of his own medicine, Super Calo attacked La Parka with a chair after their match.

Bret Hart accepted Hogan’s challenge. Apparently he cleared it with Sting to get first dibs. Bret Hart v Hollywood Hogan, sounds like a good main event to me…

The Disciple came out for his match using nWo music but wearing an OWN vest. He also acted like Warrior… well, he tried to at least.

Tony Schiavone broke the news that Chris Jericho had issued a challenge to Goldberg for later in the show.

Scott Steiner appeared to injure his back during his handicap match. Nobody was buying it though, how many times has he cried wolf?!

Warrior cut some nonsense promo. Apparently at Halloween Havoc he will become “full blown” whatever that means…

Buff Bagwell informed us that Scott Steiner had sustained an injury and that the long awaited Steiner v Steiner match scheduled for Halloween Havoc might be off. He was interrupted by Chucky-esque laughter, just as Rick Steiner was a couple weeks ago.

Alex Wright cut an anti-American promo, and then called out The British Bulldog.

Juventud Guerrera – who had come down to protest Disco Inferno’s cheating antics against Chavo Guerrero – took a wicked Piledriver from Disco.

Eric Bischoff had the Four Horsemen escorted out of the ring, and the arena, by some local cops.

DDP cut another friendly promo on Goldberg. So far Goldberg hasn’t even acknowledged his forthcoming title defence against Page at Halloween Havoc yet.

The Alex Wright v British Bulldog match suffered from the double ref count finish after a German Suplex from Wright. One ref counted Bulldog’s shoulders down while another (who had appeared after an injury to the original ref) counted Wright’s down.

Kevin Nash was attacked by nWo Hollywood members during his match with Brian Adams. Scott Hall was one of them, and he got some cheap shots in before Konnan and Lex Luger made the safe.

In the main event Hollywood Hogan focussed his offence on the injured knee of Bret Hart. Sting and his Wolfpac pals decided that Hart was in no condition to continue and hit the ring to protect Hart and put him on a stretcher. Konnan and Luger had to hold Hart onto the stretcher so he could be taken away for treatment, while Sting took The Hitman’s place in the match. In the back Buff Bagwell and Scott Steiner (dressed as surgeons, for some reason) attacked Luger and Konnan, Hart then escaped and headed back to the ring. As Sting applied the Scorpion Death Lock on Hogan, Hart nailed him with a DDT. The Hitman, showing no signs of injury, continued the beat down to Hogan’s delight and even applied the Sharpshooter. It was a set up all along!