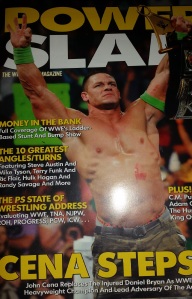 The WWE magazine wasn’t the only wrestling publication to go under recently. Over on these shores, it was announced that Powerslam magazine was also finishing up after a 20 year run.

Here, Craig looks at the impact of the magazine and future of wrestling publications more generally.

Institution is perhaps a term that’s banded about too readily. I’m not going to afford that word to Powerslam magazine. That isn’t to say it didn’t have a hugely significant impact on my life and the lives of many wrestling fans here in the UK.

From a very early age I choose that magazine, from about the age of 14 or 15, just as I was starting to get into Raw on Sky Sports, Powerslam was the accompaniment. I’m sure then there was a wide variety of wrestling magazines to choose from – not so much in Dumfries, Scotland, anyway. Bar the official publication but even at that age I wanted a more insider insight rather than the kayfabe stuff from the WWE.

But that’s no slight on Powerslam, it was magazine of choice for a very good reason. In fact, I continued to buy it until a few years ago and I was saddened to learn that August’s edition would be the final one. After 237 months, the writers at Powerslam HQ were hanging up their keyboards, certainly in regard to that publication.

I bought the last copy with great interest. There’s no denying that Finlay Martin, the Editor, over his long period at the helm of the magazine did a fantastic job. As he states in his farewell column, he’d spend 7 days a week writing the magazine. That’s an enormous amount of effort especially when you consider the rate that the magazine industry has diminished in recent years.

The fruits of his labour, for wrestling fans like myself, were worth it. Whether it was their PPV and DVD reviews or the always excellent ‘State of Wrestling Address’ that was introduced in more recent years.

For those perhaps not in the know, the wrestling scene in the UK is buzzing. But it is a scene that, until very recently, was largely overlooked by Powerslam magazine. One Glasgow wrestling promoter told me, in detail, of the difficulties he had in getting them to publish stuff on his promotion.

Fighting Spirit Magazine (FSM), their main rivals, took a very different approach.  Naturally they looked at what was going on Stateside but also covered the UK scene with aplomb. It could have been an easy way to get Powerslam new readers and use British stars, desperate to make a name for themselves, to get them there.

But that’s not to say that Powerslam just talked about WWF and WCW and more recently just WWE and TNA. Not at all, it’s the magazine that introduced me to the wonders of wrestling in Japan. In no way am I anything like an expert on the goings on over there but it introduced me to some of the most sensational and intense wrestling around.

For any magazine, things can’t be terribly easy. Especially if the majority of your publication, this certainly goes for those at Powerslam and FSM, rounds-up recent events. I mean, why buy a magazine to find out the last month’s Raw results when with a click of a mouse you can have that information at your fingertips via a plethora of websites.

You really have to make the content stick out and Powerslam certainly did that for many a year. One of my favourite features was the monthly Q&A where various readers’ questions would be answered by experts at the magazine. Although, it paled in comparison to the feature that was ongoing that looked at the history of PPV and ever WWE and WCW pay per view.

One thing is for sure, I’ll certainly miss the PS50 – their list of 50 wrestlers whom the writers believed to have had the most successful year – but I’m sure the Powerslam team won’t necessarily miss all the effort that went into compiling the list.

Will the magazine be missed? Absolutely. However, I await, with excitement, the e-books that Finlay plans on launching. Until then, there’s a magazine shaped hole in the lives of many a wrestling fan.

One thought on “The sad demise of Powerslam magazine”