15 years ago, a man had an idea to capitalize on the booming popularity of pro wrestling. Keep in mind, this was in 1999…in his eyes, it was the height of the Monday Night Wars and the ‘Attitude Era.’ TV ratings were at an all time high, pay per view buy rates were tremendous and the mainstream media was in infatuated with the product like never before. It only made sense that somebody NOT named Ted Turner or Vince McMahon try and get a piece of the big wrestling pie.

The truth was, however, while pro wrestling was still doing tremendous business, WCW had become lost and was slowly deteriorating….ECW was inching closer and closer to bankruptcy and the media , while covering the product…was mostly putting the business in a negative light from all the sex and smut angles being used. That didn’t stop college sports entrepreneur Bill Stone from delving head first into the already saturated market.

His idea was to create a “senior circuit” in pro wrestling that would focus on some of the bigger names of the 1980’s and early 1990’s. It would be more of a family friendly product without the salacious storylines of ECW, WWE and WCW. Bill Stone’s idea was to have quarterly pay per views. The only caveat was Stone relying on at least 40,000 pay per view buys for the initial event.

Now admittedly, Bill Stone had zero experience in the wrestling business…but as a businessman, he was able to invest over $300,000 dollars in securing talent and production. He found a riverboat called ‘Casino Magic’ in Mississippi that was willing to pay an undisclosed amount to house the event in a 3,000 seat arena. Stone was also able to get some major cable companies on board with his project. 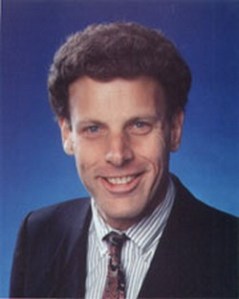 While Stone knew how to work the business aspect of the event which he named it, ‘Heroes of Wrestling,’ the booking and preparation is where he immediately found trouble. He booked and advertised the legendary Gordon Solie to do play by play for the event, but Solie no showed the event as his health was in serious decline. Bill Stone would decide to replace Solie with one of his broadcasters from his college sports endeavors named Randy Rosenbloom. While a successful broadcaster in college sports for over 20 years…none of those years were ever involved in wrestling.

His lack of knowledge was extremely evident during the show as he continually missed calls and mispronounced basic wrestling moves. As bad as Rosenbloom was, he wasn’t the worst part of the show…it was actually the talent. Not realizing the age and physical conditioning of some of the wrestlers proved to be a major challenge. He had booked a tag team match between the Bushwackers against Nikolai Volkoff and the Iron Sheik. The match was slow, sloppy and all the participants were winded early.

He had booked Abdullah the Butcher to take on the One Man Gang. Stone’s lack of knowledge about Abdullah’s reputation caught him by surprise as Stone was shocked when he saw Abdullah busted open and bleeding like a stuck pig. Not exactly the family friendly atmosphere he had originally envisioned. 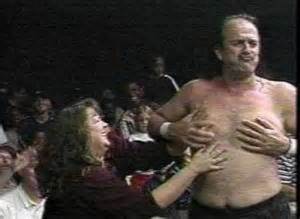 There was a double main event for the evening which would feature Jim ‘The Anvil’ Neidhart versus Jake ‘The Snake’ Roberts and King Kong Bundy versus Yokozuna. Firstly, Jim Neidhart was a no show for the majority of the night. Apparently, his flight kept getting screwed up…so he finally arrived 40 minutes before his match. His opponent, Jake Roberts was completely intoxicated and high as a kite. So much so, Roberts cut a promo so bad…it has become legendary in some circles.

The match itself never really occurred as Jake was too inebriated. It got so out of hand that Jake used his snake Damien as a penis and mocked masturbation. The cameras had to quickly pan away from Jake’s antics. Seeing as the match was going nowhere, King Kong Bundy and Yokozuna were called to the ring to make it a tag match. There were problems with Bundy and Yokozuna as well. Both men refused to lose and take the pinfall for the other man. Add to that, Yoko’s weight was completely out of control during this time. He would die a year later. 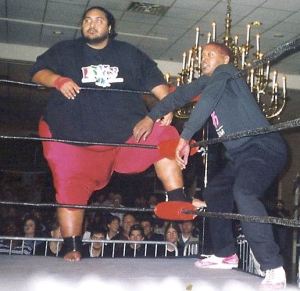 The pay per view was a flop…while statistically…not the worst selling pay per view in history….it only generated about 20,000 buys. Even if it had broke the targeted 40,000 buy mark…the Heroes of Wrestling event was DOA. The initial show left such a bad taste in Bill Stone’s mouth…he washed his hands of the wrestling industry completely. As a matter of fact, before the show was even over, Bill Stone was booking his flight out of Mississippi. He was that scarred by the experience.

5 thoughts on “We Need A Hero: The Worst Pay Per View In the History of Wrestling”