He was ‘The One’, ‘Rockabilly’ and more famously ‘Badd Ass’ and in this latest ‘The Many Faces Of’, Craig looks back at the wrestling career of Monty Sopp, better known to WWE fans as one half of the New Age Outlaws: Billy Gunn.

Billy and Bart Gunn with Sunny

Between 1993 and 1996, Sopp appeared on WWE TV as Billy Gunn alongside his storyline brother Bart as part of the “Smokin’ Gunns”. Initially, they floated around the mid-card and it took until early 1995 for them to win the tag titles – defeating the makeshift team of Bob ‘Spark Plugg’ Holly and the 1-2-3 Kidd. They held the gold until Wrestlemania XI when they were deposed of the gold by Owen Hart and Yokozuna but the pair would win the gold back by the end of the year.

A neck injury put Billy on the shelf from February 1996 but upon returning in May he and Bart would win the tag titles for the third time defeating The Godwinns. On September 22 at ‘In Your House: Mind Games’, they once again dropped the gold to a team featuring Owen Hart but this time he was paired with The British Bulldog. Post-match, Sunny – who was now managing the duo left them while Billy, also frustrated with losing the titles and the managerial services of Sunny, walked out on the pair breaking up the Smokin’ Gunns.

After a brief feud with his brother, Billy began working under the tutelage of The Honky Tonk Man as ‘Rockabilly’ Billy Gunn and engaged in a feud with Jesse James. Realising that neither of them was going anywhere, the two asked the WWE if they could pair up and the alliance was complete when Gunn turned on Honky by smashing a guitar over his head.

And in one fell swoop one of the Attitude Era’s most entertaining tag teams was formed. 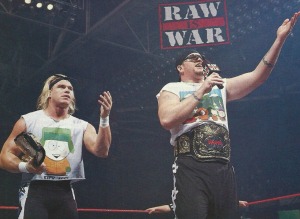 In early 1998 the pair started to align themselves with D-Generation X and helped Shawn Michaels retain his WWF title against The Undertaker at that year’s Royal Rumble event.

The following month they’d team with Triple H and Savio Vega – standing in for the injured HBK – to face Stone Cold Steve Austin, Owen Hart, Cactus Jack and Chainsaw Charlie in a losing affair. By this point they had segued into a feud with Jack and Charlie including famously locking the pair in a dumpster and tossing it off the stage on Raw leading to their Wrestlemania XIV Dumpster Match.

At Mania, Chainsaw Charlie and Cactus Jack defeated the New Age Outlaws to win the tag gold. The Outlaws regained the titles the very next night on Raw in a cage match. More importantly, however, the pair officially aligned themselves with the new DX which now featured Triple H, Chyna, X-Pac and the Outlaws.

During the summer the DX feuded with the Nation of Domination – which now included Owen Hart – and the Outlaws briefly feuded with the New Midnight Express, part of the much maligned NWA Invasion angle.

By the close of 1998 both Outlaws began to focus more on singles competition with Road Dogg chasing, and winning, the new Hardcore title while Billy Gunn chased the Intercontinental title.

Gunn would have a short reign with the hardcore title in the run up to WrestleMania XV but would drop the gold on the night to Hardcore Holly in a triple threat bout also featuring Al Snow. The New Age Outlaws briefly reunited at Backlash 1999 to face Owen Hart and Jeff Jarrett but soon afterwards Gunn left DX and aligned himself with Triple H and Chyna, who had earlier left the stable.

Gunn won the 1999 King of the Ring but was unable to capitalise on the win and didn’t stay in the main event picture for long.

In the summer of 1999 Billy Gunn won the King of the Ring tournament, defeating Ken Shamrock, Kane and X-Pac along the way. After this win, Gunn, Triple H, and Chyna feuded with X-Pac and Road Dogg over the rights to the D-Generation X name. This feud culminated at Fully Loaded when X-Pac and Road Dogg defeated Gunn and Chyna.

After this, the King of the Ring winner entered a brief feud with The Rock. At SummerSlam 1999, The Rock defeated Gunn in a Kiss My Ass Match and afterwards Gunn drifted down the card and entered into a programme with Jeff Jarrett over the Intercontinental Title before once again reuniting with Road Dogg.

The Outlaws won their fourth tag team championship by defeating The Rock ‘n’ Sock Connection in September 199 and after defending against Edge and Christian and The Acolytes, they reunited with X-Pac and Triple H to reform D-Generation X. This time around DX would feud with Austin, The Rock, Kane, Mankind, Shane McMahon, and Vince McMahon and it was at this time that Road Dogg and Badd Ass won the tag titles for the fifth time by beating Al Snow and Mankind.

The new millennium started with the team retaining their titles against The Acolytes at the year’s Royal Rumble. A feud with The Dudley Boyz followed with the ECW alumni wining the titles at No Way Out. Afterwards, Gunn, who had legitimately suffered a torn rotator cuff, was kicked out of D-Generation X. In reality, it was to give Gunn time to recover.

In October 2000, Gunn returned to the WWF and entered into a programme, alongside Chyna, with Right ot Censor. Owing to a stipulation in a match, Gunn was no longer able to use his Mr. Ass gimmick. He briefly competed as ‘Billy G’ before settling on “The One” Billy Gunn. Gunn then feuded with the recently debuted Eddie Guerrero and the rest of The Radicalz – Dean Malenko, Perry Saturn and Chris Benoit.

At November 2000’s Survivor Series, Gunn teamed with Road Dogg, Chyna, and K-Kwik against the Radicalz but it was the team that had recently jumped ship from WCW that triumphed. However, Gunn was able to get a measure of revenge by defeating Guerrero for the IC title however it was a short reign with Chris Benoit beating him at Armageddon for the title.

Afterwards, Gunn once again turned face but was directionless and found himself involved in a series of fairly meaningless mid-card feuds for the remainder of the year.

After a Sunday Night Heat loss to Chuck Palumbo, Gunn suggested the pair form a team and the duo of Billy & Chuck was born. Initially babyfaces, they were given a gimmick where they grew increasingly affectionate towards each other.

A tag title win came in February when they bested the duo of Tazz and Spike Dudley and soon found, in Rico, a stylist for the two.

Later that summer Chuck proposed to Billy, asking him to be his “partner for life”. Billy said yes and on the September 12 episode of SmackDown!, Billy and Chuck had their wedding ceremony.

However, it was quickly revealed to be a sham and a publicity stunt. The preacher revealed himself to be Eric Bischoff who summoned 3 Minute Warning to beat up Billy & Chuck. This prompted a short feud and a face turn but soon the team split up with Billy Gunn out with a shoulder injury.

Gunn returned to the ring in 2003 with his former Mr. Ass gimmick. However, he wasn’t able to achieve the success he had previously largely competing in mid-card feuds before being relegated to wrestling mainly on Velocity. He did form a short lived tag team with Hardcore Holly in 2003 and they received a title shot against Charlie Hass and Rico but were ultimately unsuccessful. Gunn then began a pursuit for the United States Championship but was unsuccessful in this also.

In November 2004, the WWE brought an association that had lasted more than a decade to an end when Gunn was released from his contract. Soon afterwards, he gave an interview where he was heavily critical of the WWE and, in particular, Triple H.

We will have part 2 on Monday. In the meantime, you can read all previous ‘The Many Faces Of’ pieces here.

5 thoughts on “The Many Faces Of Monty Kip “Billy Gunn” Sopp Pt. 1”