This is the 85th installment of the ‘Wrestling with Sin‘ series. A group of stories that delves into the darker, underbelly of pro wrestling. Many of the stories involves such subjects as sex, drugs, greed and in some cases even murder! As with every single story in the Sin series…I do not condone or condemn the alleged participants. We simply retell their stories by researching interviews, newspapers, magazines and various other sources of media.

In 2013, CM Punk aka Phil Brooks obtained a restraining order against an unlikely individual. It wasn’t a crazed fan or a bitter enemy…it was his estranged mother. Punk claims that his mother suffers from bi-polar disorder and constantly demands money from him.

Punk said that he gave his mother over $100,000 and refused to give her any more. He says that when he refused her more money, she would threaten to either expose “embarrassing” information about his past (which includes CM Punk getting arrested while still in high school) and or threatens to kill herself. Punk claimed that his mother has threatened suicide on at least four different occasions. 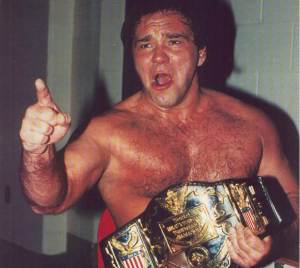 Former AWA world champion Larry Zbyszko was allegedly arrested back in 1986 after a domestic dispute with his wife at the time. Details are a bit sketchy about how and why the incident occurred, but allegedly Zbyszko struck his wife in the face breaking her orbital bone.

According to the late Larry Nelson (former AWA announcer) Larry’s ex was a bit unstable. After the couple split, Larry’s ex followed him to various arenas and left “racy” pics of herself on the windshields of fans cars. Some of the photos allegedly had her in compromising sexual positions with another unnamed AWA personality. Zbyszko would later get romantically involved with AWA owner/promoter Verne Gagne’s daughter.

Roy Knight aka The Zebra Kid aka Roy Bevis is the half brother of current WWE star Paige. Knight is also a pro wrestler who competes mainly out of the United Kingdom. Knight has been no stranger to the wrong side of the law as he has been arrested multiple times for various offenses.

The biggest came in 2005, when Knight was in involved in a fight at a pub and he allegedly assaulted a police officer. He was also in possession of a deadly weapon (a knife) Roy Knight has also been arrested for drunk driving and assaulting a referee during a soccer match.

Former WWE wrestler/announcer/manager and current Lucha Underground play by play man was involved in his fair share of scandals. Firstly, when he was a Social Studies teacher in New York, he took a bunch of sick days to wrestle over in Japan. When the Board of Education found out, Striker was quickly fired.

The other scandal involved what is believed to be a jilted ex girlfriend who posted pics of Matt Striker’s penis all over the internet. There are some candid pictures with Striker’s face, but all the nude one’s are from his belly down.

Former TNA and WWE wrestler Serena Deeb was arrested back in July of 2012 for allegedly Boating Under the Influence aka BUI. It was alleged that Deeb was arrested for driving a boat under either the influence of alcohol or drugs. Deeb was quick to deny the allegations saying on Twitter, “Ok…can anyone REALLY picture me driving a boat? Get real.”

Deeb was arrested and posted a $150 bond to get released. Deeb has admitted to battling alcohol problems in the past and it is allegedly one of the reasons she was released from the WWE. Deeb has said she is now clean and sober and retired from wrestling.

Former wrestler Luis Rios Rodriguez aka Black Ninja in Carlos Colon’s World Wrestling Council based in Puerto Rico was arrested in 1997. The charges were that he allegedly raped and sodomized his underage step daughter. Other info is currently unknown about the results of the trial or what he plead.

In 2016, Jerry ‘the King’ Lawler and his girlfriend Lauryn McBride were involved in a domestic dispute. Both contended that the other used physical violence against the other. It all allegedly began when McBride came home intoxicated and Lawler asked her whereabouts. McBride claims that Lawler struck her on the side of her head and pushed her into the stove. She then claimed Lawler grabbed an unloaded pistol and told her, “Go ahead and kill yourself.”

Jerry Lawler countered saying that she kicked him in the groin and she grabbed the gun and threatened to kill herself with it. The arrest led the WWE to suspend Jerry until further notice. The judge ordered that the couple stay away from each other with absolutely no contact until the case could be heard.

The charges for both Lawler and McBride were dropped when it could not be determined who was the primary aggressor in the dispute. Since the charges were dropped, Lawler was reinstated by the WWE. Jerry Lawler is 41 years older than McBride.

3 thoughts on “Wrestling with Sin: The 85th Jamboree”