We have reached a milestone in our 1996 timeline. A world class performer has made his debut in a new industry and changed the way we view sport and entertainment forever. Yes, that’s right, this week back in 1996 saw the release of Space Jam! As well as Michael Jordan hanging out with Bugs Bunny and Daffy Duck there was also something called The Survivor Series. All this and more in this week’s The Way We Was…

If you’re the kind of person who doesn’t like change then Survivor Series 1996 is not the show for you. Amongst all the debuts, returns and gimmick changes we have a new WWF Champion. Yes, against all popular logic at the time, Sycho Sid defeated The Heartbreak Kid Shawn Michaels to capture his first WWF Title. What’s more, it was actually a relatively entertaining bout, due in no small part to HBK’s sterling efforts. Not that these efforts were recognised by many of the fans in attendance mind you. With the show held at Madison Square Garden, the audience was typically vocal, with the higher pitched (female) voices very much behind Michaels and the deeper (male) voices audibly against him. While such crowd reactions are not new, the boos seemed far louder than previous instances. As for the match itself, the better than expected bout ended with Sid appearing to complete his heel turn by using a TV camera and a chair to get the job done. The camera did not strike Michaels but did mentally eliminate him from the bout. Sid actually smacked Michaels’ manager, Jose Lothario, with the pricey piece of equipment. What followed was particularly distasteful as the 61-year-old clutched his chest while Vince McMahon – instead of calling for help or helping himself – theorised that he may be suffering a heart attack. Michaels understandably leapt to his mentor’s aid and was suitably distracted for the remainder of the bout. That said, all that remained was a rather awkward ref bump, a chair shot from Sid and a powerbomb for the pinfall and the WWF Championship.

In Other News From Survivor Series – 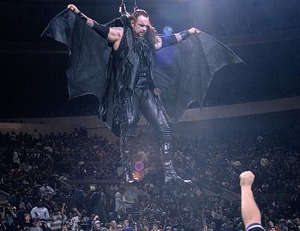 He’s the champ in the ring, on the weights and in Jim Ross’ heart

So Sid is the WWF Champion, what did the Master and Ruler of The World have to say for himself this week’s live episode of Raw? In an interview with Jim Ross the big man appeared to backtrack from full-blown heel status, which he appeared to reveal at Survivor Series. He said that he respected Jose Lothario, but when HBK’s manager stood on the ring apron he “got involved in the game”, and thus got smacked with a camera as a result. Sid also had no problem offering Shawn Michaels a rematch and said he would be a fighting champion for all the fans that believed in him. The almost babyface again Sid ended on a confident note by saying that he would defeat Bret Hart at In Your House 12. 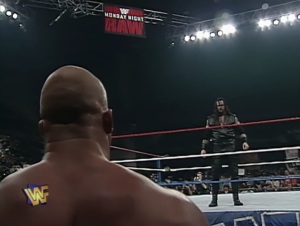 Goth Taker rocks the leather. I can’t imagine it’s comfortable to wrestle in

Faarooq actually looks like his wrestling figure in this photo

The hug heard around the world

An eventful few days in the WWF was trumped by what WCW offered us on Nitro. Play by play announcer, executive producer and most powerful man in the company, Eric Bischoff, has turned heel and joined the New World Order. A heel authority figure, eh? Wonder if that’ll catch on?

One could argue that given the verbal and physical abuse he has suffered at the hands of the nWo, Bischoff joining them makes zero sense. But hey, we didn’t question The Giant joining the group, so let’s not start now. Let’s just say he did it for the money, that’ll do. Also, using the benefit of hindsight it is now clear that the seeds for Bischoff’s heel turn were planted weeks ago. So subtle were these seeds that I genuinely did not twig that I was watching Eric Bischoff’s heel turn until Rowdy Roddy Piper insinuated that Bischoff was lying about his negotiations with the Canadian Scotsman. For weeks Bischoff has been telling us of the slow negotiations with Piper’s representatives regarding a match with Hollywood Hogan were progressing. However, this week Piper actually showed up and quizzed Bischoff over his bullshit. At this point the entire nWo came out and all was revealed. The outcome of the segment – other than Bischoff turning heel – was that Piper accepted the challenge and will bring a contract for Hogan to sign to this Sunday’s World War 3 pay per view.

Sting tries another new hobby, but has yet to master this baseball stuff

I bet He-Man is shitting himself

Quote of The Night

“Jeff Jarret’s in because The Nature Boy says so”

Nitro’s 3.2 trumps Raw’s 2.4. That said, neither show could lay a glove on this week’s Monday Night Football which drew a 21.4. The Dallas Cowboys picked up a 21-6 win at Green Bay