This is the 95th installment of the ‘Wrestling with Sin‘ series. A group of stories that delves into the darker side of professional wrestling. Many of these stories involve such topics as sex, greed, drugs, arrests and sometimes even murder! As with every single story in the Sin series, we do not condone or condemn the alleged involved. We are simply retelling these stories that have been told throughout the years.

Race to the Bathroom!

One night in 1984, the WWF put on a show in the same area as the NWA was having one. Harley Race became incensed that the WWF would dare tread on an NWA territory. He decided to go to the WWF event and send a message. First, he went to the arena and tried to light the ring on fire. When that failed, Race demanded to know where Hulk Hogan was. Hogan was the WWF’s biggest star and their world champion.

Hulk was at a nearby restaurant when Harley Race came in looking for him. Hogan was in the middle of going to the bathroom when several WWF wrestlers screamed to Hogan that Harley Race was there. In a panic, Hogan ran out of the bathroom to find Harley Race standing in front of him with a 9mm gun pointed at his head. Harley threatened Hogan saying he was going to blow off his kneecaps. He then left leaving Hogan a nervous wreck. Harley would eventually join the Hulkster in the WWF two years later.

Blame it on the Bass-a-nova

This wasn’t the only time Hulk had a gun pointed at him. Earlier in his career, in the late 1970’s while wrestling in Memphis, Tennessee as Terry Boulder, he had a run-in with ‘The Outlaw’ Ron Bass. According to Bass, Hogan was making big money in the Memphis territory and bought a brand new Lincoln.

Ron Bass “accidentally” ran into Hulk’s brand new car with his car. Enraged, Hulk got out of his vehicle to confront Bass. Ron Bass then pulled out a .357 magnum and pointed it at Hogan who ran off scared and Bass laughing.

In June of 2008, the then developmental wrestler Wade Barrett was at a local Florida bar. While leaving the establishment, Barrett got into a verbal altercation with a female patron. An off-duty cop who was at the same bar tried to stop Barrett from leaving and that allegedly caused an altercation between the cop and Barrett. 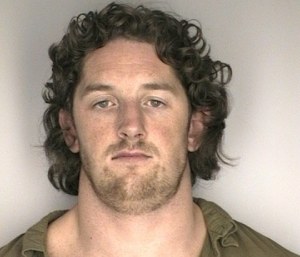 One report had Barrett getting shot with a taser by the off-duty cop to try and subdue him. Either way, Barrett was arrested and charged with Battery of an Officer. He remained in jail for a day before being released. The female involved in the initial altercation refused to press charges. Barrett would later state that if he knew the man was an off-duty cop,he would have never left the bar in the first place.

There is bad blood within the Guerrero family. It allegedly all started after Eddie Guerrero passed away in 2005. Eddie’s widow, Vickie Guerrero was accused of cutting off the rest of the family to her and her daughters. The reasons are not exactly known as to why Vickie cut ties with the Guerreros, but it all came to a head on Twitter.

Eddie’s older brother Chavo Guerrero Sr. blasted Vickie and her decisions and the two fired barbs at each other.

Chavo Sr: tell ur followers how u cut off the grandmother of ur children with a letter after eddie passed her son…

Vickie: Anything to do with @chavoclassic has no importance to me or ever has. @mexwarrior (Chavo Guerrero Jr.) is respected and loved by my daughters and I.

Chavo Sr: Then I will write what I want if u don’t like don’t read as far as the injection guerrero the JUdge is in heaven.

Vickie: i cant believe my valuable time got caught up with nonsense,,,I’m FREE….enough said. #lessonslearned.

In 2015, Vickie got remarried to a man named Kris Benson with her two daughters by her side. Vickie has reportedly stayed on good terms with Chavo’s son Chavo Jr…but nobody else in the Guerrero family.

The Steaks are too High…Apparently

In 1983, while wrestling for his father Angelo Poffo’s International Championship Wrestling promotion (ICW) Randy Savage was arrested for shoplifting. According to police, Savage walked into a local supermarket while in McKee, Kentucky and placed a steak into his jeans and walked out of the store.

Savage was quickly arrested and charged with a misdemeanor. He was later released and continued his reign as ICW champion.

6 thoughts on “Wrestling with Sin: 95 Miles”