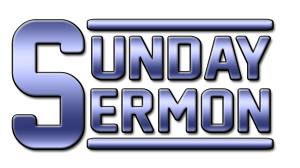 If you are in your late twenties to mid-thirties, Bobby ‘The Brain’ Heenan was the preeminent voice in wrestling through his time with both the WWF and, later on, WCW. His wise-cracks and one-liners marked him out as one of the most entertaining and best commentators in wrestling – he was equally as popular for his time as a manager. In today’s Sunday Sermon, we discuss the life and times of the legendary ‘The Brain’.

Craig: Tragically, Bobby Heenan has spent the last number of years ill and unable to lend his remarkable insight to the world of wrestling. He was a man that with one wise-crack or line, could elevate any storyline. Who can forget his now iconic commentary during the 1992 Royal Rumble? “It’s not fair to Flair” was the cry as “the real world champion” entered third but managed to outlast everyone to win the match and the WWF world heavyweight champion.

Or are your memories of Heenan from an earlier time as his charges in the WWF waged war against Hulk Hogan? Perhaps it was when Heenan helped uplift the suspension and turn heel Hogan’s former friend Andre the Giant, leading to their WrestleMania III blockbuster? Or is it his calling of matches in WCW at the height of the Monday Night Wars when an unmatched global audience tuned in every Monday night to take in the antics on Raw and Nitro?

Heenan will now be reunited with the man he wished had been there to see him inducted into the WWE Hall of Fame – his friend, Gorilla Monsoon. But in today’s Sermon, let’s remember all those iconic moments and quips from the best broadcast journalist there ever was in the world of wrestling.

Brian: All of the above and then some! Bobby ‘the Brain’ Heenan was perhaps the greatest manager of all time. When you were managed by Heenan. it was a big deal. As you already mentioned, Heenan had the ability to elevate any wrestler he managed with his quick wit and heelish tactics.

He was the manager who got all the top heels in every promotion he worked for. Whether it was the AWA world champion Nick Bockwinkel or the Blackjacks, to the WWF where he led guys like King Kong Bundy, Mr. Wonderful Paul Orndorff and Andre the Giant. Heenan had a knack for elevating wrestler into stars even if a said wrestler could talk and do things on his own. His very presence just made that wrestler that more important.

There is also something about Bobby Heenan that often times gets lost in the shuffle when talking about his career. Bobby was actually a very talented in-ring worker. He could take sensational bumps and sell moves and make them look better than what they actually were. All around, Heenan was a master of everything he did. I haven’t even gotten into his time as a “broadcast journalist” with his impeccable comedic timing hosting Prime Time Wrestling with Gorilla Monsoon or when he got his own segment called “The Bobby Heenan Show.” A true legend.

John: I honestly don’t think it’s disputable that Heenan was the best manager ever. He outdid everybody that came before him and I don’t think anybody that came after him would put them in contention. He was one of the most complete characters in wrestling and could apply himself to nearly any situation.

I have such fond memories of his time managing Mr Pefect, Rick Rude and of course the Real Worlds Champion Ric Flair which may have been his best and a fitting one to bow out on before becoming a full-time commentator. His big mouth coupled with his big bumps made him so entertaining. I’ll never forget watching the trio of Heenan, Perfect and Flair during their run. They genuinely seemed to like each other and it was a stroke of genius giving Flair a manager. Flair was one of the greatest promos ever himself and then you add Bobby on top for a world-class combo and that’s before they added Mr Perfect to the mix.

I was actually watching Razor Ramon vs Bret The Hitman Hart from Royal Rumble 93 last Friday and was in knots of laughter due to Heenan running down Stu and Helen Hart on commentary. As a kid, I was always so frustrated by his obvious lying and couldn’t wait to see his charge get their comeuppance. 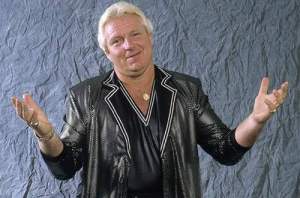 Amerigo: This one has me heartbroken. As others have stated, Heenan did exactly what a heel manager was supposed to do, promote his product, and bring MAJOR heat from the crowd. The “brain” did this perfectly no matter where he worked. Even if he was working with one of the better promo guys (Flair) Heenan always had something else to add to the promo that was entertaining.

Managing aside, his mic work with Gorilla Monsoon was legendary. Heenan contradicted and second-guessed everything Monsoon said as if Gorilla had no idea what he was talking about. Today’s commentators should be required to view a few events those two worked to see how it’s done.

Lastly, he entertained. He provided me with some great memories of the bumps he took. Just watch him sell the “belt move” with Ken Patera. Hands down one of the funniest things I’ve ever seen.

Rest easy Bobby, thank you for everything you did.

Jamie: I am not saying this because he has recently passed, but Bobby ‘The Brain’ Heenan is both my favourite wrestling manager and favourite colour commentator ever. Getting into wrestling in the early 90s, my exposure to Heenan was mostly via his commentary. While there were always reminders to his managerial roles, I mostly knew of those from watching older videos from the 80s.

I just made myself think of the first thing I could relate to ‘The Brain’ and for me, the sound of Gorilla Monsoon saying “will you stop!” jumped straight into my head. That was a common reaction from Gorilla to one of Booby’s infamous one-liners or outrageous fabrications.

In terms of a specific moment from Heenan, the panic in his face and voice on the episode of Prime Time Wrestling when Mr Perfect accepted Macho Man’s invitation to tag with him at Survivor Series is right up there in my mind. He was a completely over the top character, but also 100% believable due to the conviction he did everything with. I think it’s these ingredients that made ‘The Brain’ so entertaining as a detestable weasel who always got his comeuppance.

Craig: I agree, Jamie. While a lot of people have talked about his performance during WrestleMania 8, there hasn’t been enough mentions of the fall-out of Mr. Perfect’s face turn ahead of Survivor Series 1992. It was over the top, it was ridiculous but, more importantly, it was absolutely perfect (no pun intended) from both Heenan and Hennig. Two absolute professionals doing all they could to make the angle work and, boy, did it.

Brian: Bobby Heenan’s subtle and not subtle jabs at jobbers which he called “Ham and Eggers.” His reference to fans being “Humanoids” and the way he would go back and forth with Gorilla Monsoon is all classic material. Even in WCW, which he admittedly said wasn’t his best work…he did do a lot to help elevate several storylines. His infamous, “We are at war!” line with the emergence of the NWO. He also did a fantastic job putting over Goldberg as a really big deal, calling him “The Man.” 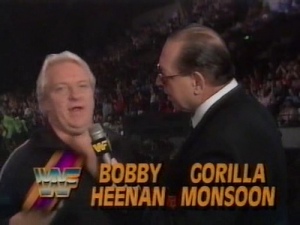 Amerigo: I was thinking of the humanoid reference this morning. I had forgotten about the ham and egger reference.

Benjamin: Yeah trying to put together a highlight of Bobby Heenan is so tough because he did so much! He helped the WWF grow so much in the 80’s. But then you look at his old AWA material and you see why the WWF jumped to get him on their roster. Then you move ahead to WCW and he’s a huge voice to the Monday Night Wars in the 90’s.

Probably one of my first memories of Bobby Heenan when I truly understood how big of a jerk he was is when Paul “Mr Wonderful” Orndorff turned on Hulk Hogan in 1986 and joined the Heenan Family. Kids at school were incensed, ripping Orndorff folders that we bought at K-Mart. How could do he that? Oh right, Bobby Heenan.

Much like Roddy Piper; fans loved to hate Heenan. Even while they were booing him and insulting him they were smiling. Definitely a one of a kind talent.

Russ: Best commentary ever was for the 1992 Royal Rumble. God bless you Bobby.

You can read all previous Sunday Sermon pieces here.