Back in 1997 it was a time of hellos and goodbyes. While we said goodbye to Beavis and Butthead, we said hello to Starvin Marvin in South Park’s most recent offering. All very good, but let’s see who was saying hello and who was saying goodbye in this week’s ‘Meanwhile, in WCW’…

Everybody was wearing a Sting mask this week

Nitro’s main event was a rematch from Saturday Night, and also featured the same result i.e. DDP defeated Curt Hennig by DQ. This time it was an interfering Rick Rude who forced the stoppage by dragging referee Randy Anderson out of the ring as he was counting Hennig’s shoulders to the mat. The rest of nWo, naturally, hit the ring for a beat down of Page. DDP held his own for a bit, until Macho Man nailed him from behind with the US Title. The whole squad then came out with Hollywood Hogan delivering two Diamond Cutters to Page. The placing of a Sting mask on DDP’s face was significant because earlier in the show Hogan got hot at the crowd for wearing them. He promised that if fans did not remove the masks then bad things would happen. Well, they were warned. 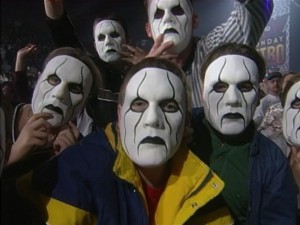 So, this isn’t creepy at all…

“He punched through the chair!”

This week’s Raw was not very good at all. It was the go-home show before In Your House 19: D-Generation X, which will be main evented by Shawn Michaels defending his WWF Title against Ken Shamrock. So, naturally, this show focussed largely on Michaels’ attempts to embarrass Jim ‘The Anvil’ Neidhart. As you do…