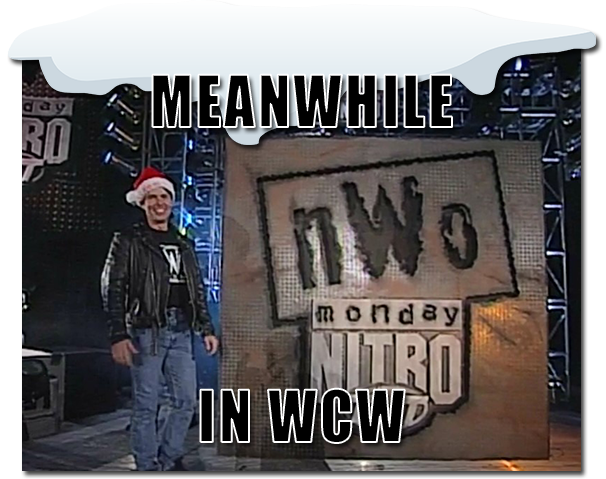 IT’S CHRISTMAS! Compliments of the season to one and all, however our 1997 timeline hasn’t quite reached the big day yet. Thus, today we bring you all the action from the December 20th episode of WCW Saturday Night and the December 22nd episode of Monday Nitro. As you can probably tell from the cover image, this was no normal episode of Nitro, so let’s get to business in the penultimate ‘Meanwhile, in WCW’… 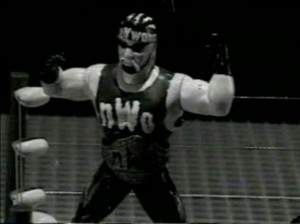 The nWo parallel universe is indeed a disturbing one

I am going to make my run-down of the go-home episode of Nitro before WCW’s biggest ever PPV as brief and as fun as possible, because the actual show was none of these things. As you may have already guessed, this was the infamous ‘nWo Nitro’ show. Having only learned minor lessons from the atrocious nWo Souled Out PPV in January, Eric Bischoff thought it would be a good idea to have another crack at airing a show run by the baddies. I shall outline how this was facilitated below, followed by the major happenings from the three-hour broadcast.

The first hour of the show was business as usual, just a regular episode of WCW Nitro. We did see a replay of Bischoff’s promo from Saturday Night, but nobody made anything of his “holiday treat” remark. Then, after Chris Benoit had defeated Hammer, we saw the familiar sight of the nWo removing the commentary team. Granted they haven’t done this in a few months, but these antics are hardly new. What was new, however, was the guys – specifically Konnan – demanding that the camera men and production crew wear ‘nWo Nitro’ t-shirts. K-Dogg also forced them to say that they were “nWo”. As this was going on, all banners and references to ‘WCW Nitro’ were replaced by ‘nWo Nitro’ ones. This was with the exception of the ring skirts though, doh! As well as Konnan, the other ring leader appeared to be Buff Bagwell who grabbed ring announcer Dave Penzer to get him on board. Dave clearly refused because Buff chucked him out of the ring before grabbing the microphone to welcome us all to “nWo Nitro”. All of this was done with no commentary and lasted over 15 boring minutes. Immediately after this, another 15 minutes were killed when Eric Bischoff, Hollywood Hogan and the rest of the higher-ranking members of the group entered the ring. Bischoff alluded to Lex Luger being booked in the show’s main event and announced that Nitro would be three hours long, to stunned silence from the bored crowd. The rest of this segment was dedicated to Bischoff presenting Hogan with gifts and verbally fellating him. After half an hour of zero entertainment killing their momentum, the crowd were understandably muted for the rest of this show. Thankfully, unlike at Souled Out in January, WCW referees were used to keep the action fair and competitive and the all heel nWo announce team was quickly reduced by two thirds for the sake of the television audience.

Yes, Hogan is kissing himself

They even had Christmas cards made. Would WCW have done that?!

If nothing else, this is a cool ring

That chair had one day left until retirement

“I told you, Bagwell plays possum and he plays it very well”

This sign was handed to Hogan by Vincent. He later received a biscuit and got his belly rubbed

Raw had more of a Christmas theme than Nitro. Our presents were The Undertaker vs. The Rock, Shawn Michaels vs. Triple H and the sight of the D-Generation X duo’s bare asses.

The ratings appear to confirm what most assumed; nWo Nitro was the drizzling shits. This week was as close as Raw got to Nitro all year.