It’s Saturday so time for the latest instalment of ’This Week in Wrestling’, the 16th of 2018. Today, Brian remembers Bruno Sammartino and shares all the best viral content he’s stumbled upon this week.

Bruno Sammartino is without question the Babe Ruth of professional wrestling.. He was a WWWF world champion for 11 years. The first ever dual champion in WWF history, as he held both the world and US tag team titles with Spiros Arion. A man who consistently sold out Madison Square Garden against various opponents.

While Hulk Hogan gets a lion’s share of the credit for the national success of the WWF, there would be no Hulk Hogan if not for the foundation laid by Sammartino. He transcended professional wrestling. Whether he was hobnobbing with celebrities like Joe Dimaggio and Frank Sinatra or holding a private meeting with the Pope, Sammartino did it all before Hulk Hogan. 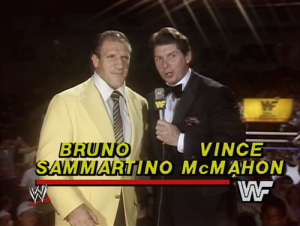 After his career was over, Sammartino became a color commentator for Vince McMahon Jr. He still remained an extremely popular personality in which McMahon tried to capitalize by having him return to the wrestling ring. Vince and Bruno would develop a love/hate relationship after Sammartino retired. Sammartino did not like the creative direction the WWF would take in the 1980’s and left the company, becoming one of its strongest critics.

Bruno would then make several appearances for any wrestling promotion who competed against Vince McMahon. Whether that was Herb Abrams UWF, WCW and even Ring of Honor. Bruno was a beloved figure in this business and hardly anyone who met the man had a bad word against him. Bruno was, in fact, a “Living Legend” as statues were created in his honor in the WWE and in his birth hometown in Italy.

An actual college course of his life was created in the Community College of Allegheny County in Pennsylvania. Sammartino lived a long and great life, He had his own share of ups and downs which included a fractured relationship with his own son David. After years of bitterness, he and McMahon made up and Sammartino was inducted into the WWE’s Hall of Fame in 2013.

After all his incredibly violent and brutal battles inside the ring, the number of injuries took its toll on his body and Bruno died this past week at the age of 82.

Tattoos do’s and dont’s…this certainly falls under the DO NOT category. 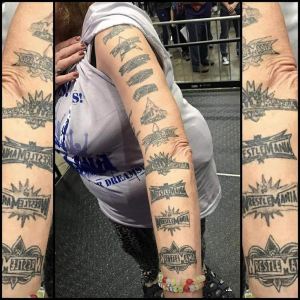 Bruno Sammartino posing with a statue in his honor in his birth home of Pizzoferrato, Italy. 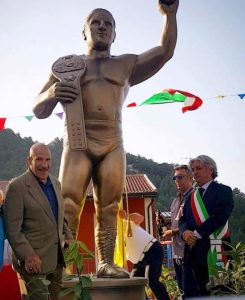 The Iconics of Billy Kay and Peyton Royce looking…larger than before.

DIVAS! Loads and Loads of Divas… 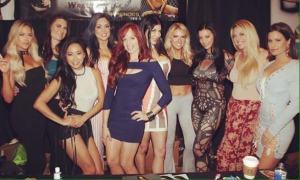 If this is real, I want it!

Alexa Bliss and her sister…errr…I mean her MOM!!!

Smackdown Live after the Superstar Shakeup…