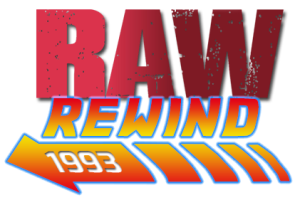 Welcome to the latest edition of ‘Raw Rewind‘ from 1993. Today we cover the episode from 26 April, and more.

You can read the last Raw recap here.

Vince McMahon introduces the show he’s with Macho Man Randy Savage and Bobby ‘The Brain’ Heenan as we see Damian Demento is already in the ring, getting the jobber entrance treatment. Crush and Lex Luger are in action and we’ll hear from Shawn Michaels.

Vince hypes that Mr. Perfect will be Intercontinental Champion once again soon. Savage addresses the lack of Bartlett and McMahon announces that he quit after hearing Heenan would be on.

Headlock from Perfect to start before a dropkick fells Demento. Heenan says that Hennig was ‘perfect’ when he managed him but not now. Demento catches Perfect in the face with an elbow and hammers away before tossing him to the outside, wiping out the cameraman.

It looks like Hennig has maybe blown out his knee. He’s dragged back in and works on the midriff before sending him hurtling into the other corner. Perfect eventually is able to block a couple of shots before landing several chops to the chest then a knee lift. Running neck flip has Demento on the ropes but an elbow to the gut curtails Perfect’s steam. A running splash is countered with raised knees and Perfect hits the Perfect-plex for the win.

Overall: It was there but not much else. Odd saying Demento getting so much offence at this stage of his run with the company.

Heenan slags off the slightly rotund Raw lady before rambling about some fan in attendance who is going to propose to his girlfriend tonight on the show. Could be fun.

Match 2: ‘The Narcissist’ Lex Luger vs.

We see an x-ray of Luger’s arm, playing up the controversy surround his forearm. Quite the battle of mullets here. Collar and elbow tie-up to start until Crush pushes Luger away and into the corner. Luger flexes and offers Crush a test of strength. The big Hawaiian looks less than impressed… Crush overpowers him until Luger hits a shot to the gut and gains control.

Crush military presses Luger, in quite a remarkable feat of strength. Luger looks enraged and takes to the outside. Vince continues to try and claim that the screws in Luger’s arm nearly protrude through the skin. Back in the ring Luger hammers away at Crush with punches and elbows. But Crush counters with a big dropkick and a series of arm drags.

We return from a break and Crush has an armbar applied. A belly-to-belly suplex gets him a two but he misses a corner charge and a running knee sends Crush tumbling to the outside. On the outside, Luger drives Crush back first into the ringpost. In the ring, Luger applies a bearhug but Crush breaks it with forearms to the side of the head but is caught in a powerslam for a two.

Luger attempts a suplex but it’s blocked then countered into one of his own from Crush. Savage cheers on Crush as he hits a belly-to-back suplex. Crush slams Luger and hits a standing legdrop for a two count. Crush applies the Cranium Crunch but spots Doink up in the crowd. He tries to tempt him into the ring and we see Luger get back to his feet. We then see a second Doink in the crowd as Luger drills Crush with the forearm, sending him tumbling to the outside.

Overall: OK enough match. Finish was a bit screwy but clearly to protect both men.

ICOPRO advert with Tatanka, a Hasbro advert with Randy Savage, Sgt Slaughter and the British Bulldog.

Mr. Hughes overpowers Knight, who would eventually gain fame in ECW. Here, he tries a crossbody but eats a series of backbreakers instead – a total of three – before being thrown to the mat. Hughes hits a big boot then a chokeslam of sorts for the win. Post-match, he tosses Knight out of the ring.

Rating: A squash one and a dud.

A Smokin’ Gunns vignette airs, including Billy Gunn looking very comfortable riding a horse. They are riding horses but, get this, riding into the WWF. Great. Good luck, lads.

Another break and we return with Heenan still banging on about the couple who may or may not end up getting engaged tonight. Vince McMahon is in the ring and brings out the reigning IC Champion Shawn Michaels.

Vince continues to hype Mr. Perfect for some reason before we hear that next week on Raw Michaels will defend his gold against ‘Hacksaw’ Jim Duggan. Michaels starts by describing New York City as a “dump” and the “armpit of the nation”. McMahon leaps to the defence of the crowd calling them “wonderful fans”. What a great babyface.

A “Shawn is gay”, I think, chant breaks out as Michaels has a pop at Duggan. We see footage from WrestleMania IX of Michaels attacking Mr. Perfect after his match with Lex Luger. As Michaels slags off Mr. Perfect, he makes his way to ringside, much to the delight of the NYC fans. Michaels cheap shots Perfect and Hennig chases him to the back.

We see Bam Bam Bigelow nearly attacking Sensational Sherri on WWF Superstars before Tatanka makes the save, including dropkicking Bigelow off of the stage and diving off of it onto his foe. We then see Bigelow attacking Tatanka backstage before his match and cutting off his hair.

Typhoon headlining a show in 1993. What a time to be alive. Von Kruss hammers away to start but quickly takes a back bodydrop and a big clothesline. Jim Duggan calls in to discuss his Intercontinental title shot.

Not sure what’s happened but Von Kruss is in charge, including an elbow drop to the groin and one to the chest. Bobby Heenan starts verbally attacking Duggan, including calling him a “half-wit.”

Typhoon fights back and hits a running charge into the corner then a running splash and that’s all she wrote.

Rating: Nothing much to see here.

Bobby ‘The Brain’ Heenan is ringside speaking to the couple who may or may not get married. Wait, he proposes. Heenan makes him get down on one knee and he asks again, she says yes. They refuse to get married on a future Raw episode but Heenan claims he’ll make it happen.

Next week on Raw, Kamala will be in action so will the Headshrinkers and ‘Hacksaw’ Jim Duggan will challenge Shawn Michaels for the Intercontinental Title.

A Slim Jim advert airs before we cut back to the engaged couple as we go off the air.

Overall Thoughts: Nothing much to see here.

In other WWF news…

Hulk Hogan is working just three WWF dates in May, teaming one each occasion with Brutus Beefcake against Money Inc.

WWF has contacted several of the leading indie promoters and told them not to use the name Nailz when using Kevin Wacholz.

Sean Mooney will be gone once his contract expires.

Looks like the Beverly Brothers “turn” was only a one-week program to set up the one television match.

Randy Savage is still working a few house dates in May against Giant Gonzalez.

Looks like Ron & Don Harris won’t be coming in after all.