This is the 194th installment of the ‘Wrestling with Sin‘ series. A group of stories that delves into the darker, underbelly of pro wrestling. Many of the stories involve such subjects as sex, drugs, greed and in some cases even murder! As with every single story in the Sin series, I do not condone or condemn the alleged participants. We simply retell their stories by researching interviews, newspapers, magazines and various other sources of media. 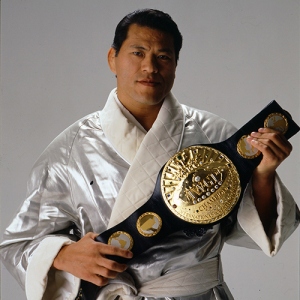 Antonio Inoki was and is a legend in Japan from his days as a professional wrestler, to his political career. He was also the founder of New Japan Pro Wrestling in 1972. During his career, Inoki has been involved in a few scandals. One of them involved Inoki being discovered having an affair with another woman despite being married. In Japan, adultery is seriously frowned upon among its celebrities. The Japanese believe that celebrities such as pro wrestlers are held to a higher standard and looked up to as super heroes.

When it was revealed that Inoki was unfaithful to his wife…Inoki needed to admit the affair publicly and atone for his mistake. If not, Antonio Inoki would be ostracized by his fans and his career might never recover. Inoki admitted to the affair and apologized for his transgressions. He then shaved his head in an act of humility and removed himself as a main event wrestler by putting himself on the bottom of the cards he promoted. As we all know, his affair was eventually forgiven and forgotten about and Inoki continued as one of Japan’s top stars.

During the early days of Mick Foley’s career in World Class Championship Wrestling he was known as ‘Cactus Jack Manson.’ In many ways, because of his eerie resemblance to the serial killer known as Charles Manson. While in WCCW, Cactus Jack met a female fan who attended countless shows at the Dallas Sportatorium. The two hooked up and went on a few dates.

She called herself Maryann Manson. She would turn out be a very deranged stalker of his. She would continually send letters to Cactus Jack and refer herself as his “wife” and became very protective of him if any fan male or female tried to get meet him after an event. To rid himself of the stalker, Foley requested that the name Manson be dropped from his gimmick. It apparently worked but she went on to stalk other World Class stars.

The Princess and the Dog

Princess Jasmine was a professional wrestler from the late 1960’s, 70’s and 80’s. She wrestled in various territories and all over the world including Japan, Canada, the Middle East and Africa. She also competed in the bigger promotions like WCW, AWA and the WWF briefly. Jasmine was said to be a great worker who never missed a match in her career and also one of the best talkers in women’s wrestling. Jasmine was also a trainer on the all women’s wrestling show called GLOW (Gorgeous Ladies of Wrestling) in the 80’s.

Princess Jasmine once did a tour of Africa during an extremely volatile time. Nigeria was in a revolution and Jasmine was right in the middle of it. She was nearly stabbed by a crazed fan and was almost kidnapped by a Nigerian chieftain who was obsessed with her. The chief was very persistent wanting her to stay in Nigeria and be his bride. Princess Jasmine kept on turning down in his offers, but the chief would not take no for an answer. Thankfully, Princess Jasmine was able to escape him and Nigeria and get home safely.

Cherie Deville also announced her running mate as Grammy award winning rapper Coolio. Thrown in to all of this is former WWE and WCW star Virgil/Vincent who was hired to be Deville’s “personal bodyguard.” Yes, the same Virgil who once portrayed the bodyguard of ‘The Million Dollar Man’ Ted Dibiase in the WWF and the New World Order in WCW.