He is the son of one of the legendary members of the Fabulous Freebirds, Terry ‘Bam Bam’ Gordy. He would follow in his late father’s footsteps and start a career in pro wrestling. A career which took him all the way to the WWE. Today on the blog, we ask:’Whatever Happened to Ray Gordy?

Terry Ray Gordy Jr was initially trained to become a pro wrestler by his father Freebird Terry Gordy in 2000. Ray started competing on various independent promotions in the south. After about a year into his career, Gordy traveled to Japan (a mainstay of his father) and trained in the Pro Wrestling Noah Dojo run by Mitsuharu Misawa. He would wrestle for Pro Wrestling NOAH for about a year until returning to the states and compete in the southern indies again.

After a tryout with WWE, Gordy was signed to a developmental contract in 2005. Gordy wrestled a few dark matches for the company during this time and was assigned to Deep South Wrestling. One of his first WWE gimmicks was that of a cousin to the Godwinn family and began teaming with Henry O Godwinn on the house show circuit in test runs. Ultimately, the decision was made to team Gordy up with another developmental wrestler named Drew Hankinson instead. 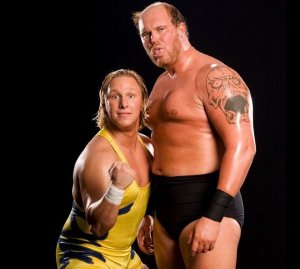 In 2007, the Dalton Boys debuted on the Smackdown brand…with Hankinson being renamed ‘Festus Dalton’ and Gordy renamed ‘Jesse Dalton.’ They also had a catchy entrance theme entitled ‘Biscuits and Gravy.’ They started toning down the hillbilly aspect of the team and the Dalton Boys started to become a popular tag team. In the end, Vince McMahon had other plans for Drew Hankinson who eventually was renamed Luke Gallows under a different gimmick. Jesse Dalton (Ray Gordy) would also be repackaged under another gimmick.

Gordy would be repackaged as ‘Slam Master J’ a sort of wannabe white rapper. Gordy had previously used a similar gimmick in the independents under the moniker of Ray Geezy…so this wasn’t exactly new territory for him. He would be involved heavily with the team of Cryme Tyme and also formed a team with Jimmy Wang Yang. In 2010, WWE released several talents with Ray Gordy being one of them.

So the question is:’Whatever Happened to’ Ray Gordy? Ray would retire from pro wrestling after his release from WWE. His uncle was in law enforcement and urged him to consider it as a career change. Gordy would become a police officer and ultimately become a member of the Cobb County, Georgia Swat Team. He is married and resides in a suburb of Atlanta.

You can read all previous ‘Whatever Happened to’ pieces here.

One thought on “Whatever Happened to Ray ‘Slam Master J’ Gordy?”