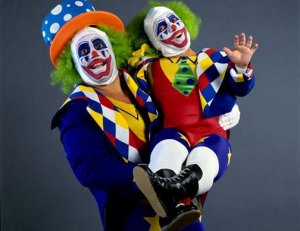 Clowns are creepy, right? Well, that was the thinking of the WWF in late 1992. But it wasn’t long before they turned that clown babyface. In this latest ‘Well That Didn’t Work‘ piece, we take a look at that babyface run of Doink the Clown.

I don’t claim to speak for everyone but I’ve always hated clown. Always. But that hit dislike high a new high (low?) in 1992 when, under the guise of Doink the Clown, Matt Osborne debuted on WWF television. I mean, check out this intro music…

For those of an older vintage – or, those that knew more about wrestling – the late, and very great, Osborne perhaps hit his WWF peak at the first-ever WrestleMania back in 1985, albeit in a losing affair against Ricky Steamboat.

When he debuted, he began to play pranks on both wrestlers as well as the fans at WWF shows. One of the early victims was Crush, which led to a feud between the pair. At WrestleMania IX, held at Caesar’s Palace, Doink defeated Crush after interference by a second Doink – played by Steve Keirn of Skinner fame. 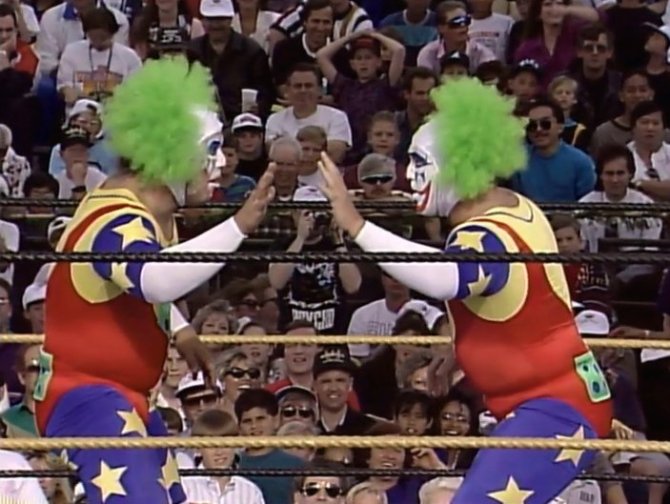 Ostensibly a mid-carder, there were times Doink threatened higher parts of the card. At SummerSlam 1993, for example, he stood in for the injured – storyline only – Jerry ‘The King’ Lawler in his match against Bret ‘The Hitman’ Hart.

However, despite promising much, Doink was soon turned babyface and, to add insult to injury, was joined by Dink, a midget dressed as a clown. By this time, however, Osborne was gone and it was Ray Apollo who would now don the brightly coloured attire and make-up and make his way out, accompanied by Dink, as Doink the Clown.

Whilst the pranks would continue, it would be heel wrestlers who would be the focus and instead of cruel, they’d be harmless. Two of the recipients would be Bam Bam Bigelow and his ‘main squeeze’ Luna Vachon, which would lead to their match at WrestleMania X. He would even resume his feud with Lawler – leading to their match at Survivor Series 1994, where they were joined by three midget partners.

By late 1995, Doink was relegated to the role of a jobber losing to up-and-coming superstars and wouldn’t be seen for a number of years on WWF television.

Osborne would even reprise the role for the 15th-anniversary edition of Raw. Taking inspiration from Heath Ledger’s version of The Joker, in 2010 Osborne began wrestling under the guise of ‘Reborne Again’ – an updated version of Doink, a play on his ECW ‘Borne Again’ gimmick of old.

Sadly, Osborne was found dead on June 28, 2013, in the Plano, Texas, apartment he lived in. The cause of death was later determined to be an accidental overdose of morphine and hydrocodone. He also suffered from heart disease, which had been a contributing factor in his death.

Could it have been different had he not turned babyface? It’s really tough to tell. What isn’t up for debate, however, is how different, for the time, the Doink the Clown character was. After all, this was an era of ‘say your prayers and eat your vitamins’ superheroes. And what did Osborne bring to the party? An overtly creepy clown character who played, often, dark tricks on the fans in attendance.

Another thing, however, that isn’t up for much debate is that the character lost its way upon its babyface turn. Gone was the darkness and the uneasiness of the WWF fanbase. Also gone was the dark and brooding theme and in its place was an upbeat ditty with Doink now replaced by the crowd-friendly Dink. Could Doink have ever been world champion in the WWF? Absolutely not. But boy did the company cut short his heel run, which, looking back, seems a waste.

You can read all previous ‘Well That Didn’t Work’ pieces here.

8 thoughts on “Well That Didnt Work: Doink the Clown’s babyface run in the WWE”