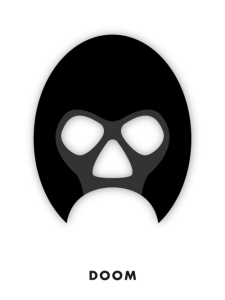 ‘Hacksaw’ Butch Reed and ‘The Real Deal’ Ron Simmons had so, so singles careers in WCW. Both were meandering on the mid card level. The decision was made by the NWA bookers to pair them up and form a team. They were introduced at Halloween Havoc in 1989 by Woman, who was feuding with the Steiner brothers. Woman proclaimed that the Steiners would meet their doom at the pay per view event.

To make Doom seem new and fresh to fans, Reed and Simmons identities were hidden by a couple of masks. That would be all well in good, except that the masks really didn’t leave much to the imagination. You could still make out their faces behind the hoods. As Ron Simmons also put it, they were the only two black wrestlers in the company, so fans were quick to identify who Doom were.

Despite the lack of mystery behind the team, Doom were pushed as a monster heels. They scored victories over teams like the Steiners and the Rock N Roll Express. Along with Woman as their manager, they also had a 7’1 wrestler named Nitron in their corner. After an initial strong push, Doom started losing a number of matches to higher profile teams. Woman eventually split from the team and former referee turned manager Teddy Long took over.

Doom were finally unmasked at Clash of the Champions X: Texas Knockout and revealed to be Butch Reed and Ron Simmons….much to the “surprise” of the announcers Jim Ross and Jim Cornette. The loss of the masks and getting a new manager in Long proved to be the best thing that could have happened to Doom. The team had a resurgence of success and a renewed push up the tag team ranks.

Doom would feud with the Road Warriors and the Four Horsemen and build up a nice winning streak. They would ultimately win the National Wrestling Alliance world tag team titles. While the team found a great deal of success in the ring, outside of it….Butch Reed and Ron Simmons weren’t exactly best friends. According to both Reed and Simmons, they had much different personalities and often times they would clash with one another.

Reed liked to party too much after the shows, while the younger Simmons wanted to focus more on fitness and just earning a paycheck. Simmons said that at a point, he stopped hanging out with Reed after events. While the two didn’t hate each other, they were just simply different from one another. At one point, Simmons claimed that the World Wrestling Federation contacted him to jump ship…but out of loyalty, decided to stay whee he was.

Doom did make history in a weird sort of way. They were the last team to become the NWA tag team champions and the first WCW tag team champions after the company was taken over by Ted Turner and renamed. When Doom lost the tag titles to the Fabulous Freebirds, Ron Simmons and Butch Reed agreed to split up the team and pursue singles careers. Reed and Simmons began a feud against each other with Reed as the heel and Simmons as the face. In an interview years later, Reed admitted he took “some liberties” aka worked extra stiff on Simmons.

After their brief feud fizzled out, Butch Reed left WCW and Simmons would eventually become the first recognized black world heavyweight champion. Doom would reunite in the WWE in 2007…but as groomsmen or shall I say Doomsmen for Teddy Long’s wedding with Kristal Marshal. In the end, it wasn’t all gloom and doom for Butch Reed and Ron Simmons.