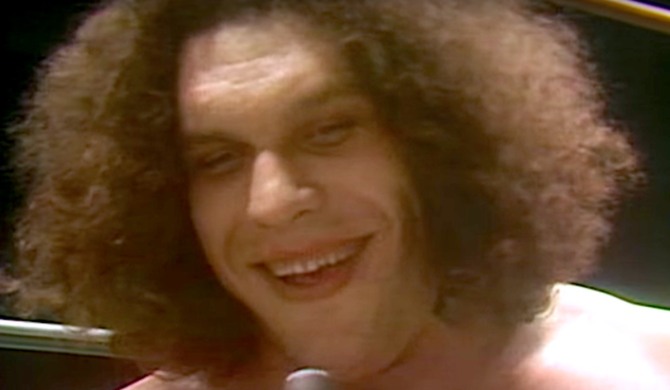 Andre the Giant was many things…he was big, strong, lovable and fearsome. He truly was larger than life in many aspects. No doubt about it, at Andre’s size…he was a very intimidating wrestler. One of the many things that helped make Andre look so imposing…was his famous long curly locks of hair. It certainly added to Andre’s look and in one night, it was all stripped away.

It was at a WWF television taping in November of 1984 at the Mid Hudson Civic Center in Poughkeepsie, New York. Andre was scheduled for a tag team match against Bobby Heenan’s stable which consisted of Ken Patera and ‘Big’ John Studd. Andre’s tag team partner for the evening was Special Delivery (SD) Jones. Studd was involved in a battle for “Giant Supremacy” with Andre over who was the true Giant in professional wrestling.

In reality, while John Studd was tall (He stood about 6ft 10 inches tall) was smaller than Andre and actually wore lifts in his boots to make him appear almost as tall as Andre. The match itself wasn’t much to speak of as SD Jones was thrown out of the ring and hit his head on the steel barrier…knocking him out. The tag team match quickly became a handicap match with Andre fending off both Studd and Patera. The Heenan Family got the upper hand by relentlessly double teaming the giant. 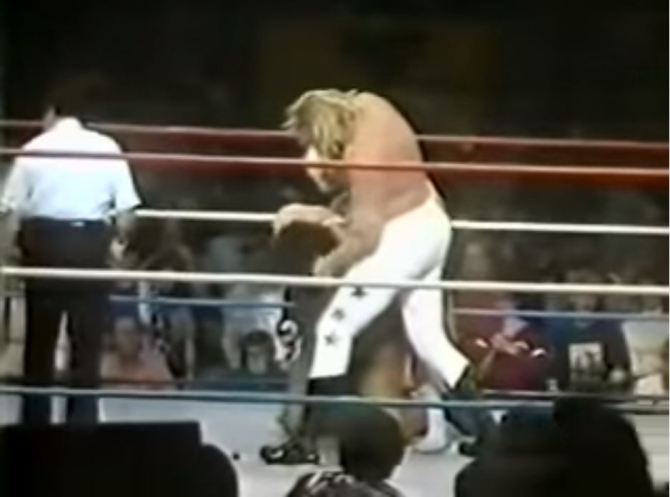 Eventually, the duo had Andre the Giant unconscious from their beating. According to Bobby Heenan, Andre was legitimately knocked out for a couple of seconds by an accidental stiff forearm by Ken Patera. Once Andre was down on the mat all beaten and battered, Heenan climbed on the ring apron, reached into his pocket and took out a pair of scissors. As Patera held Andre, Studd began to cut off Andre’s legendary locks.

SD Jones recovered enough to attempt to get back in the ring to help out Andre, but Heenan held him off by kicking him a few times. As Studd continued to cut Andre’s hair, Vince McMahon was on commentary screaming that they (Studd, Patera and Heenan) were “raping Andre of his dignity.” Bruno Sammartino, who was also on commentary, was acting just as horrified by what he was witnessing. SD Jones was finally able to get in the ring as the Heenan Family left the ring with clumps of Andre’s freshly cut hair in their hands. 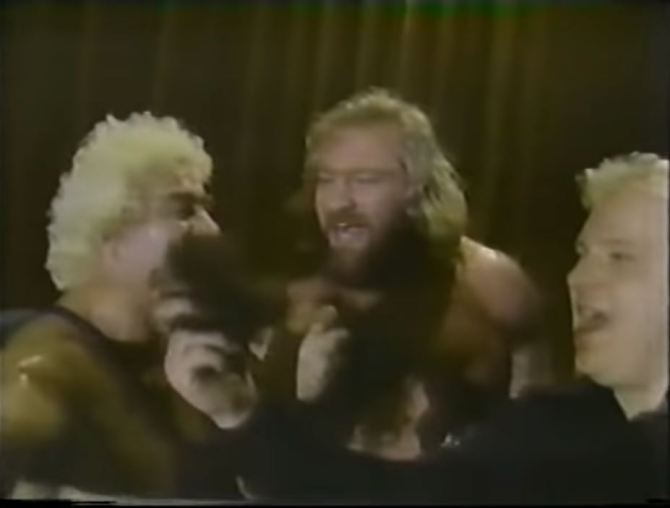 Fans at the Mid Hudson Civic center were in a frenzy, as they saw their hero being beaten and humiliated at the hands of these three dastardly villains. They were all throwing debris in the ring in disgust. Studd, Patera and Heenan showed off their trophy to the cameraman at ringside…as Bobby Heenan proclaimed that they killed the Giant. All this while Andre was laid out in the middle of the ring with his cut off hair surrounding him.

Andre would eventually come to and see all his hair all over the mat. SD Jones helped Andre to his feet while trying to explain exactly what had just happened. Andre looked visibly upset and humiliated and walked back to the dressing room with his head down. Vince McMahon would go on to say this was one of the worst displays in World Wrestling Federation history. This was the first real impact newly acquired manager Bobby Heenan had with the WWF since he joined them a little earlier that year. It also elevated the feud between Big John Studd and Andre the Giant.

3 thoughts on “Shear Brutality: The Infamous Haircut of Andre the Giant”