What wrestlers had the best changes in gimmick and or character in pro wrestling?

So many great workers with bad characters got that make over that really put them over the top.

5) Ray Traylor to Big Bubba to Big Bossman
Ray Traylor was one of the finest big men of all time. And was around near the end of the territory days ,where he wrestled as Big Bubba Rogers..Upon his WWF arrival, he had been christened the Big Boss Man, a nod to his stint as a prisoner officer. As Boss Man, he would enjoy tremendous success main eventing with both Hulk Hogan and Randy Savage and after that, spending a great many years as a top good guy.

4) Dustin Runnels/Rhodes to Goldust
Dustin Rhodes, the son of the American Dream Dusty Rhodes… somewhat successful in WCW holding tag team gold and helping his dad out in a memorable feud with Arn Anderson..Rhodes would take time off and appear as Goldust, a homoerotic movie quoting face painted superstar. He would capture intercontinental gold, and the character would remain popular throughout various incarnations of itself. Rhodes no longer uses the moniker ,but his look is still quite similar, in his late 40s..he can still go…

3) G.I Bro to Booker T
Booker Huffman 1st entered the national scene in the GWF..as G.I Bro..a G.I JOE offshoot. The gimmick was blasted as somewhat stereotypical. He would go on to become Booker T, team with his brother Stevie Ray and become 1st an incredible tag team wrestler, who would go on to become a 5 time..5 time…you know the rest.

2) Glenn Jacobs to Issac Yankem to fake Diesel to Kane
Like Bossman..Glenn Jacobs went through many characters before finding success, a bit at a time.as Unibomb..he teamed with Al Snow and captured SMW tag team gold . He would enter WWF as Issac Yankem..a deragend dentist, later he would reprise the fake Diesel. But it wasn’t until the 1st ever held in a cell that Jacobs would get the break of a lifetime. Kane, the half brother of the Undertaker, made his ominous debut..and has been a fixture with the company ever since.then, even taking the mask off and becoming corporate Kane… 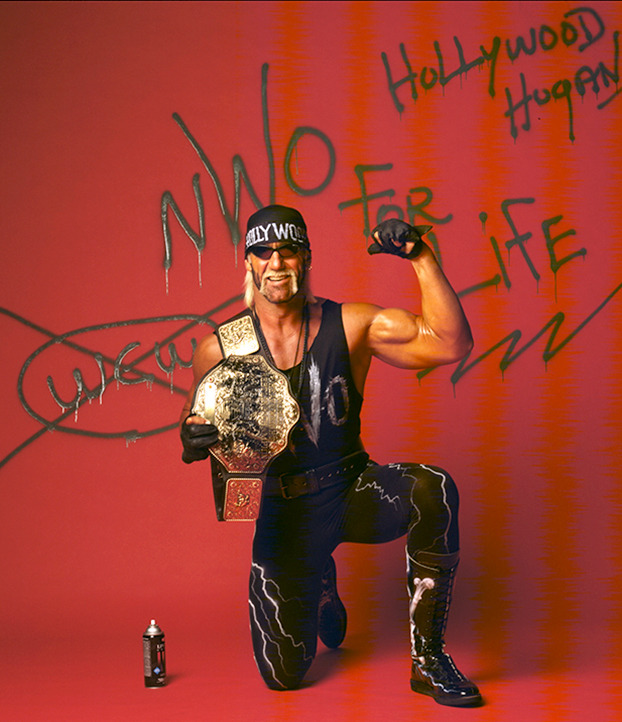 1) Hulk Hogan to Hollywood Hogan
Funny enough, the most famous wrestler of all time started out with various names. Until landing on the Hulk Hogan name and becoming a worldwide phenomenon. It’s hard to even suggest . But Hogan would go on to achieve one of the best career resurgences ever. With the heel turn head around the world and the formation of the NWO..Hogan became Hollywood, and gave himself probably the greatest character change ever…from say your prayers good guy hero to “you fans can stick it” black and white clad villain 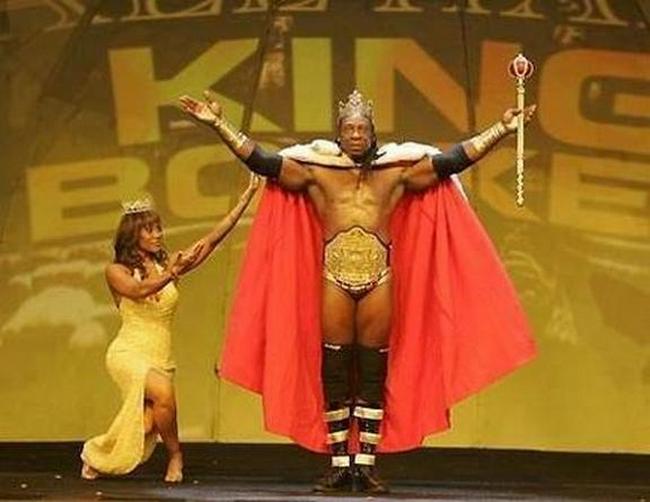 5. King Booker – As Louie mentioned on his list, Booker T really developed over the years from the GWF to WCW to WWE. While an established star in WCW, he basically was somewhat lost in the shuffle in WWE. When he won the King of the Ring tournament and transformed into ‘King Bookah’ I feel he truly found his niche within the company. It also gave him a pretty big push that resulted in him winning his sixth world title. 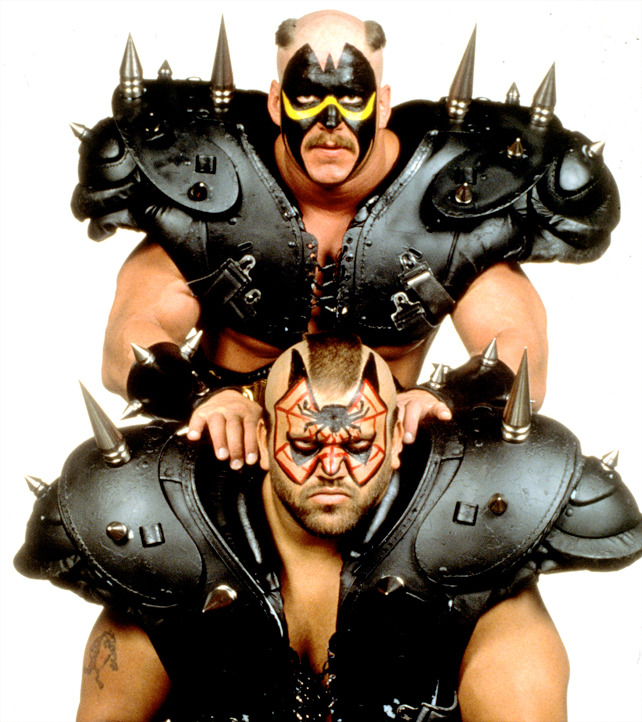 4. The Road Warriors – It was a long time ago, but many fans might have forgotten or simply didn’t know that the Road Warriors as we affectionately know them nowadays…isn’t their original gimmick. They once wore hats, vests and chaps with normal hair cuts and no face paint. They had a regular biker gimmick. Realizing they looked like they were straight out of the Village People, they decided to appear more intimidating and changed their entire look. Gone were the hats, vests and chaps and in came the Mohawks, face paint and spiked shoulder pads that we all grew up with and loved.

3. The Rock – Let’s face it, Rocky Maivia was a failing gimmick for the World Wrestling Federation. Once they turned him heel, everything changed and for the better. He started talking in third person, grew long sideburns, wore flashy shirts and changed his name to simply the Rock. Suddenly he became a sensation in wrestling and arguably one of the business’ biggest stars.

2. Sting – Sting was the top guy for WCW for many years. When the whole NWO angle started, Sting seemed out of place with the new direction the company was going in. Once they changed his entire look by growing out his hair, changed his attire and face paint and gave him a new tweener personality….he reemerged as a huge star. Perhaps, even bigger than he ever was in years prior.

1. ‘Stone Cold’ Steve Austin – Steve Austin had a solid career for himself starting with the USWA and moving on to WCW and briefly with ECW. When he first entered the WWF, he was called ‘The Ring Master’ and was handed the Million Dollar Belt by his manager Ted Dibiase. The gimmick faltered, simply because it just didn’t fit who Austin really was. Once they dropped that gimmick and he became ‘Stone Cold’ drinking beer, cursing and being angry at the world…he took off into a huge star for the company.

Once Steve Austin broke away from Ted DiBiase and because Stone Cold, there was no stopping him. He became arguably the biggest superstar in the history of the business. His character change came in the perfect place and time, and we’ll never forget that first Austin 3:16 promo.

The Acolytes were a great tag team, and Bradshaw was a legit badass you believe he could kick the shit out of just about anybody. However, that character was never going to go to the top. Enter JBL, the smarmy, big-mouthed business man with his own Cabinet. We would never remember him as a singles competitor without this run.

I know we’re crossing company lines here, which may be a little bit against the rules, but fuck it, I couldn’t leave this one out, but that’s why it’s #3 and not #1. What is there really to say here? He was given one of a dozen weird fantasy characters or professions that were rampant in wrestling at the time, and he turned it into the greatest gimmick of all time. We don’t revere the plumber, the hockey player, the repo man, the garbage man, or the pig farmers… but we will always revere The Undertaker.

This goofy-looking bastard was given another of the greatest characters ever. As a 13-year-old, I was scared shitless of Kane when he debuted. His and Undertaker’s angle is legendary and eternal. His Fake Diesel run is also legendary… but not for the same reasons.

1. Rocky Maivia to The Rock

The smiling, crowd-pandering Rocky Maivia was so saccharine that all the crowd could do was puke him back up when he was shoved down their throats. If you didn’t know, Jim Ross made sure to remind you 14 times per match that he was a “blue chipper” and a “third-generation talent”. It’s not what fans wanted, and they let him know with “Die, Rocky, die!” He let them know what he felt right back in the greatest character change in history. Much like Stone Cold, The Rock had so much talent that he was never going to be held down no matter what. The fans hated him, then loved to hate him, then loved him because he hated them, all the millions and millions.

5. Hulk Hogan to Hollywood Hogan
Hogan’s babyface was as stale as 3 year old bread left in the trunk of a car. His NWO heel turn was a great way to prolong his career.

4. Shawn Michaels to the Heartbreak Kid the Rockers were a great tag team and drew money. However, it was the change to the arrogant boy toy persona that really took his career to the next level.

3. Isaac Yankem to Kane-. Had this change not happened his character as a dentist would have disappeared into the bad gimmick void of the mid 90’s. Let’s not forget fake Diesel either.

2. The Undertaker -. Saddled with bad gimmicks early on in his career he almost missed his chance at greatness when allegedly Vince was not impressed after watching one of his matches before deciding to sign him. Once he got the undertaker gimmick he made the most of it.

1. Stunning Steve/Ringmaster to Stone Cold
What happens when you have a solid technical wrestler who has amazing charisma and mic skills and you finally decide to let him be himself? You end up with arguably the biggest draw in WWE history.