In honor of Black History month, who are your personal top five black wrestlers of all time? These are all your own personal choices.

All American football standout that went on to have a distinguished and successful career in the squared circle. Recognized as the 1st African American to win a recognized world title, Simmon’s time in wrestling would span 4 decades.  With a reputation of being a super nice, yet legit double tough man, he was well respected among all his peers.

A man who crossed color barriers to become one of the most popular wrestlers in the territory days. The JYD was loved by all. His foray into the WWF only made him a bigger star.  Feuds against some of the all time greats followed..and so did an action figure which was among the top 5 sellers in its line..The dog will always be remembered as one of the most beloved figures of all time.

5 time world champion and WWE champion, Booker T combined skill, athleticism and charisma like few can. He knocked every character and angle given to him out of the ballpark.  Always entertaining as either a good or bad guy. Had some of the best matches in the history of WCW before it shut down. Booker T is one of few men successful in WCW, WWE and TNA.

The brash, loud boisterous and dangerous original Gangsta.  New Jack made national headlines with his incendiary promos in smoky mountain wrestling. His feud with the rock and roll express along with his partner Mustafa Saed was probably the last great tag team feud in a territory.  His transition to ECW and singles wrestling was followed by national success. His insane balcony dives are sights to behold. A true innovator. Even though he may have a checkered reputation to some. Sharing the ring with New Jack countless times was an honor for me.

Anyone who knows me knows there was no one else i put at 1. One of my heroes and inspirations, Abby had one of the greatest, longest most storied careers anyone can ask for. Traveled the world for 6 decades, wrestled virtually every big name possible.  Had a host of classic feuds. And in my opinion one of the founders of the hardcore style. Abby truly encompasses the term living legend…

There was a point in time, when the Junkyard Dog was as popular as any wrestler in any territory. Was he a great wrestler? Nope. Was he even the most charismatic? Nope. What JYD was was a star for a period of time. Not just for his time with the WWF, but his days with Mid South especially.

Even though Bobo Brazil was way before my time as a wrestling fan…I cannot in good conscious leave him off my list. He was called ‘the Jackie Robinson of Professional wrestling’  as he broke several barriers as a black man in a predominantly white man’s business. Brazil was extremely popular with fans of different races and while Ron Simmons is widely regarded as the first African American World Champion, Brazil actually won the NWA world title in 1962. Something that was never recognized by the NWA. Brazil was true trailblazer.

Booker T was pound for pound a tremendous wrestler, who won 6 world titles during his career (5 in WCW and 1 in WWE). Booker was always accepted as a good to great worker, but for me, really came into his own when he won the King of the Ring tournament and became King Booka.

A successful crossover star from the gridiron of professional football to the squared circle of professional wrestling. Ernie Ladd was a monster standing 6 ft 9 in tall and by many accounts the strongest man in the wrestling business for years. A member of both the NWA and WWE halls of Fame.

Call him the People’s champion…the most electrifying man in Sports Entertainment, a box office star that really to me became the first real, true African American world wide cross over star the likes of Hulk Hogan, Stone Cold Steve Austin and John Cena for WWE. Some may argue that Dwayne Johnson is half Samoan….that shouldn’t disqualify him from this list. The Rock was and is one of wrestling’s biggest success stories.

5. Rocky Johnson-
Rocky takes 5th place for the simple reason that most of his work seemed to take place in the then WWF (he did work other in territories) and never really had the kind of push his son would get later on. His work in tag team action with Tony Atlas was pretty solid and his work with the Magnificent Murraco during Murraco’s I.C.title reign was pretty stellar. I got to see them fight it out live in a steel cage when I was 10 and it rivaled any cage match I have seen before or since.

4. Kamala-
another case of just finding the right gimmick. James Harris started his journey as “Sugar Bear” and it did not really take him anywhere. Flash forward a few years (while kayfabe was still strong). and the emergence of Kamala the Ugandan Giant. On one hand you had a terribly racist gimmick. If you can look past that, for just a moment you had an unstoppable monster heel, in an era when there were not too many around. I remember when Vince sr. was lending Andre out to other territories in the early 80’s. One of the magazine covers told the story of how Andre was coming to the south because he was the only one who could stop Kamala.

3. Abdullah the Butcher-
Not much I can say that has not already been said. Back in the days of kayfabe a heel’s job was to make you hate him, and fear him. Abby did this every time he entered the arena. A monster in terms of size, he moved fairly well for a big man, when he was moving at all. Most of his matches featured him destroying his opponent with a fork, or anything else he could find to use as a foreign object. The great thing about Abdullah is that his matches (while not showing a lot of wrestling skill) are just as entertaining when he is wrestling a jobber, as they are when he is wrestling a main eventer. If you have not watched an Abdullah v. Bruiser Brody match, go watch one right now, like literally stop reading this and go watch one RIGHT NOW!!!! 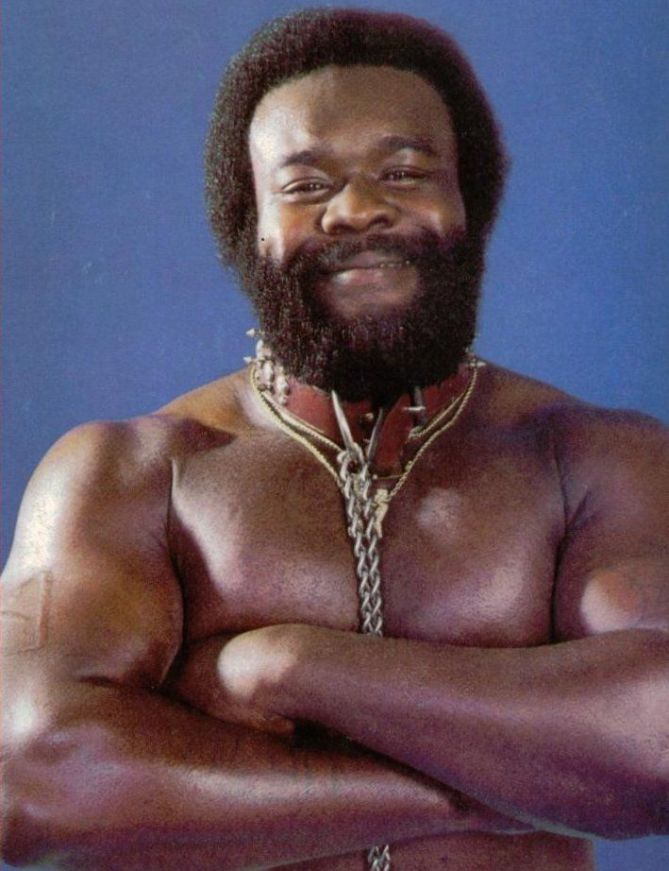 2. Junk Yard Dog-
This was a tough one to put at #2 considering all the amazing talent that has competed in the world of pro wrestling. My decision on JYD at #2 stems from his time in Mid-South under Bill Watts. This was the early 80’s deep south, only 20 or so years removed from the turmoil of segregation and the civil rights movement. Watts took a gamble on JYD being a champion and it paid off. JYD was way over during his time in Mid-South, and the crowd could not get enough of him. His feud with the Freebirds which resulted in him being “blinded” gained him huge baby face sympathy. When he lost his loser leaves town match against Ted DiBiase, he returned under a mask as “Stagger Lee” and did everything he could to antagonize DiBiase. Though he never captured gold in the WWF during his run there, one cannot underestimate the path he paved for black wrestlers and their ability to be as much of a draw as their white counterparts.

1. Bobo Brazil-
Brazil was truly groundbreaking during a time when segregation was still widely accepted and legal. Early on, especially in the south it was standard practice for black wrestlers to only wrestle other black wrestlers. Brazil was so popular that many promoters began breaking this rule and having Brazil wrestle whomever was at the top of their promotion regardless of their race.  Brazil held many championships during his carer and in some ways helped to usher in a more hardcore approach to wrestling during his legendary bouts with the Sheik. These matches were often ultra violent especially for the time in which they took place. Brazil also mentored Rocky Johnson and helped him get his push in wrestling in the 1970’s.

Honorable mention: Abdullah the Butcher, Charles Wright, Mark Henry, Norman Smiley (yes, he was entertaining as all hell), Bianca Belair, Awesome Kong, D-Von Dudley, R-Truth. To be fair, I never watched certain wrestlers like Tony Atlas, Rocky Johnson, and Bobo Brazil, so it’s hard for me to list guys I hardly know anything about.

For my money he has the second-best spinebuster ever after Arn Anderson. Such a powerhouse in the ring, and terrific charisma. A fitting person to be WCW’s first black world champion. DAMN! 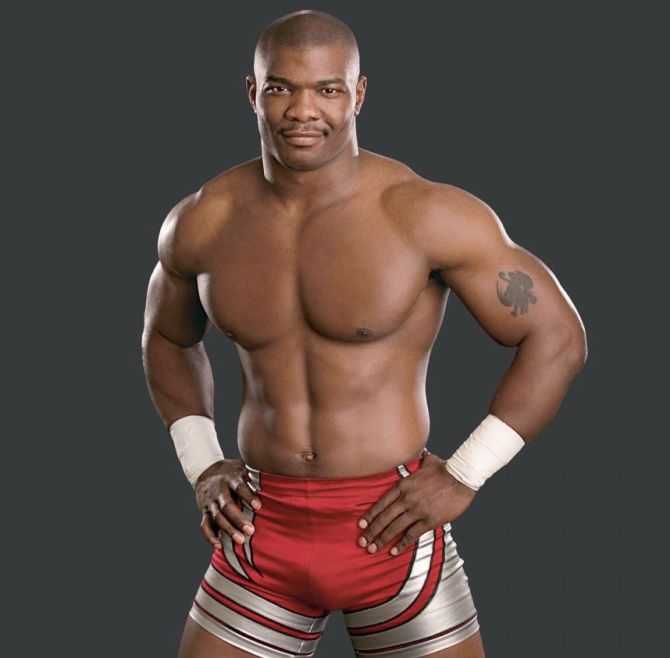 I’m so glad he’s back in WWE. I was always a big fan, and I think his amazing skill was overshadowed by being paired with Kurt Angle and Brock Lesnar. One of the best athletes and best technical wrestlers ever.

A black man who was the top face in Mid-South Wrestling. That should tell you something about how talented he was. His feuds with the Freebirds and DiBiase are legendary, and it launched DiBiase as a top heel. JYD would have been terrific in the Attitude Era with how great his charisma was.

A two-time, TWO-TIME WWE Hall of Famer, he’s one of the best ever period. He absolutely should have beaten HHH at WrestleMania XIX. He could be a main eventer, a face or a heel, a badass, or a comedy guy. A true legend, and a terrific ambassador for wrestling. Long live King Bookah!

I know a lot of people don’t think of Rock as a black wrestler, and it’s certainly not my place to argue anyone’s “blackness”, but if Rocky Johnson qualifies, The Rock must qualify. Plus, his heel turn and the Nation of Domination skyrocketed him to the top. The most electrifying man in sports entertainment. Period. We’ve sung Rock’s accolades enough that it would almost be a waste of time to reiterate them here.