In October of 1999, Jeff Jarrett announced he was jumping ship back to World Championship Wrestling. This wasn’t the first time Double J departed the WWE for WCW. He did the same thing back in 1996 and a year later, returned to the WWE.

According to Chyna in her autobiography, she alleged that Vince Russo and Jeff Jarrett conspired to have that exact scenario happen. Vince Russo was the head creative writer for the WWE…who decided to defect to WCW a couple of weeks before Jarrett’s contract expired. Perhaps Russo, booked Jarrett to remain the IC champion to take control of it in WCW?

Regardless, Jeff was the champion without a WWE contract. Surely, Vince McMahon wasn’t going to let his prestigious title walk out the door with Jarrett and risk having him besmirch it on Monday Nitro? He already endured the same humiliation in ’95 when Debra ‘Alundra Blayze’ Miceli showed up on Nitro and threw the WWF women’s title in a trash can.

The good news was that Jeff Jarrett was willing to work the match at the No Mercy event. The bad news was that he would only wrestle on the show on his terms. Vince McMahon who was usually the man with the upper hand in negotiations, found himself behind the 8 ball so to speak. Jarrett had control, because he held the IC title.

The one demand that Jarrett had was simple, he wanted all of his pay per view bonus money up front. Traditionally, wrestlers would get their bonus checks for working pay per views a few months after the actual event happened. In Jarrett’s case, not only did he want his pay off for No Mercy that night…he also wanted all past bonus money that night as well. The total sum was reportedly around or above $300,000 dollars.

In interviews years later, Jarrett’s story has wavered. He claimed the negotiations were not tenuous and actually very professional and amicable. He went on to say, he was even given some stock options during the negotiations. In another interview, Jeff Jarrett said that an hour before the show started and after the initial agreement…Double J approached Jim Ross and Terry Taylor and told them to double the initial price agreed upon. With his wallet much fatter, Jarrett performed at the No Mercy pay per view and lost the Intercontinental title to Chyna. Just one day later….Jarrett re-appeared on WCW Nitro. 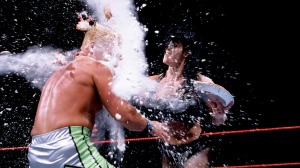 Was Jeff Jarrett accurate in saying the talks with McMahon were on good terms? Did Double J hold the IC title hostage? Was Chyna correct in stating Vince Russo and Jarrett were in cahoots the whole time? Well, I think the answer lies in the video below…when Vince bought WCW two years later.

One thought on “Ransom Money: Did Jeff Jarrett Hold the WWE Hostage?”