‘Monday Night Wars’ continues with the episodes of Raw and Nitro from 26 October 1998. On Raw there’s more Austin and McMahon fun and games in the run up to the 1998 Survivor Series. In WCW Land it is 24 hours after the infamous Halloween Havoc 1998 PPV and one of Nitro’s main events is the replay from the previous night.

All this and more as Monday Night Wars continues…

Highlights of last week’s hostage angle aired. We see Austin walking into the arena with a smile on his face. Vince McMahon then makes his way down the rampway in his wheelchair, along with Big Bossman, Gerald Brisco, Pat Patterson, Commissioner Slaughter, and several other men in suits. McMahon acknowledged that Austin was in the building had a go at Patterson, Brisco, and Slaughter for abandoning him during the hostage angle. Vince stated that Stone Cold put a legal document into his shirt last week and said the men with him were lawyers who would fight the document but didn’t explain what hte document was…

European title match to kick things off as X-Pac defends the gold against Steve Blackman. After a couple of minutes of action, Steven Regal ran out and attacked X-Pac until the New Age Outlaws made the save.

In the back, Vince chewed out his lawyers, telling themL “You wrote it, find a way out of it.”

After the break, Rocky Maivia locked up with Droz in singles action. Hawk and Animal accompanied Droz to ringside, who was wearing LOD gear. The finish came when Rocy taunted Hawk which drew him onto the apron, distracting the referee, Rocky hit Droz low and then finished with the People’s ELbow. Post match, Hawk attempted to make up with Droz but Droz shoved him off and he and Animal left together with Hawk standing in the ring looking confused.

In the backstage area,Michael Cole knocked on Austin’s locker room door and asked Austin what the document was. Austin told him to hold on, closed the door, and could be heard conferring with someone. He opened the door and told Cole, “I’ve been advised not to say anything at this time, but we’ll have a statement in front of the people later on tonight.”

The Road Dog introduced Motley Crue who performed the song “Wild Side.” The Outlaws and X-Pac sang along for a bit. During the song a “fan” attempted to get near the band and a bodyguard dragged him off.

More action featuring McMahon backstage with his lawyers. One of the lawyers told McMahon to look at the contract. By now it was getting pretty obvious Austin was back in the fold.

Kane then beat Gangrel. THe most interesting bit of this was Christian and Edge joining Gangrel in attacking Kane.

Michael Cole reports that Shane McMahon has told him the McMahons would issue a statement after the break.

When we return, It’s Stone Cold that’s making his way out and said the paper was a new contract which guaranteed him “at least one title shot”. Vince is rolled out by Patterson and is accompanied by Slaughter, Brisco and the Bossman. Vince informed Austin that since he had a new contract, he would be wrestling Ken Shamrock in an “I Quit” match later in the show. Vince asked Austin how he got the contract the way he did. He said, “You turned a relatively incompetent, underachieving kid into a monster.” Shane came out and walked right by Vince and headed toward the ring…

The Godfather fought Tiger Ali Singh in a terrible match when the referee stopped it when neither man would obey his commands.

Cole interviewed Ken Shamrock. Shamrock cut him off and told Cole to let him talk. He said, “I quit… Austin, that is the only time you will ever hear me say those words.”

Cole caught up with Al Snow and Mankind. Mankind said Snow was a great wrestler even if Head was the stupidest thing since the People’s Elbow. Snow informed Mankind he was talking to a sock. Mankind said he knew it was a sock because he painted it himself.

Al Snow and Mankind then had a tag title shot against the champions, the New Age Outlaws. Just as Snow was ready to hit Gunn with Head, Mankind stopped him and pulled out Mr. Socko. While they argued back and forth over who would get to use their object, Road Dog rolled up Snow for the win. D-Lo Brown and Mark Henry ran in and attacked the Outlaws.

[Q9: 5.1]… (8) Steve Austin beat Ken Shamrock in an “I Quit” match even though Shamrock didn’t even say I Quit… Patterson, Slaughter, and Brisco stood at ringside throughout. The commentators did a good job of building up Shamrock by saying he’s made more people tap out than anyone else in the WWF. Shamrock dominated throughout until near the end Austin went on offense, firing punches at Shamrock. Shamrock whipped Austin into the ropes, but Brisco tripped Austin. Austin attacked the Brisco. Mankind snuck in and gave the Mandible Claw to Shamrock. Austin then nailed Shamrock with a chair and tapped Shamrock’s hand to the mat as the ref woke up. Post-match, Patterson, Slaughter and Brisco all ate a stunner.

Not a great Raw… 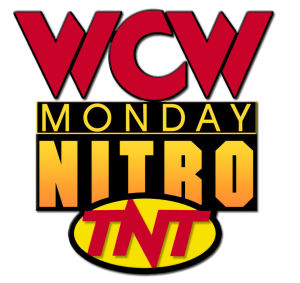 Phoenix, Arizona played host to the post-Halloween Havoc Nitro. This was one of WCW’s most infamous PPV’s ever, so I best get you up to speed before I recap Nitro. Goldberg retained the WCW Title in an absolute corker against Diamond Dallas Page. The only problem was that WCW ran out of PPV time at the end of the previous bout – Hogan v Warrior – so many fans didn’t actually get to see what is considered the best match in Halloween Havoc history. Ironically the last match these fans would have seen is widely considered the worst in Halloween Havoc history. The Wrestlemania VI rematch between Hogan and Warrior was beyond awful. Hogan won after his nephew, Horace, interfered. Elsewhere Rick Steiner won the Tag Team Titles on his own after Buff Bagwell, predictably, double crossed him. Obviously this backfired, as Steiner still won the belts. Bret Hart retained his US Title by cheating and Chris Jericho retained his TV Title against Raven in one of the best PPV opening matches I’ve ever seen.

Now, time for the last Nitro to ever directly defeat Raw in the ratings…

Tony Schiavone explained the situation regarding the previous night’s main event being cut-off. At no point did he apologise to fans but did say that the match in its entirety would be shown later on Nitro. He denied the “ratings ploy” rumours…

Stevie Ray required help from Buff Bagwell to defeat glorified jobber Kenny Kaos. The nWo members attacked Kaos after the bell until Rick Steiner made the save. Rick then asked Kaos to be his partner in his TagTitle defence against Stevie Ray and The Giant later in the show. Kaos – unable to believe his luck I would suggest – accepted.

Eric Bischoff said that he had changed his mind and would allow Ric Flair to wrestle on Nitro. Flair was delighted and seemed ready for anyone…

Kevin Nash stated that he didn’t pin Scott Hall at Halloween Havoc because the match was not about winning and losing – Nash had the match won after delivering two Jacknife Powerbombs, but chose to walk away, thus handing the count-out win to Hall – Scott Hall then appeared, mumbled a bit and shook Nash’s hand. Right on cue, The Giant appeared and helped Hall attack Nash and threw him through a wall. It was another nWo swerve.

Horace was officially inducted into nWo Hollywood, by Hollywood Hogan himself.

Judy Bagwell said that she didn’t approve of her son’s actions at Halloween Havoc and said that she was a “mom on a mission”. Oh dear…

True to his word, Eric Bischoff did allow a Ric Flair match to air on Nitro. However, in true Bischoff fashion it was a swerve. He aired a replay of Flair’s match with Hogan from Bash at The Beach 1994, which Hogan won of course.

Buff Bagwell told his mum to stay in the kitchen. Scott Steiner then called out his brother, via JJ Dillon. Big Poppa Pump then messed up his lines to the point of Bagwell having to clarify things. Apparently he was upset about a referee other than the one which started the match counting the three. The nWo lads then attacked Dillon.

Warrior cut a promo on Hogan. Hollywood and a few pals then hit the ring, however the leader of the OWN ran through Horace, The Giant, Hogan and Bischoff in quick succession.

Diamond Dallas Page won the US Title in a dramatic match with Bret Hart. The Hitman attacked DDP with a chair after the match. Goldberg made the save as Nitro went off the air.