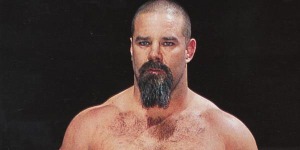 David Lee Abbott was born on April 26, 1965, in Huntington Beach, California. Aged just nine, he began wrestling and continued into college where he was a NJCAA All-American. During his time at University, where he graduated in history, he also trained in boxing. However, he would find himself behind bars after, while working at a liquor store, beat a “smart-ass” customer, who pressed for charges to be brought.

In July 1995, at UFC 6, Abbott made his way to the semi finals of the tournament – after winning the quarter and semi final matches with punches – before losing to a rear-naked choke in the final to Oleg Taktarov.

All in, his mixed martial arts record saw him compete in 25 matches, winning 15 and losing 10. Of his 10 wins, six were by knockout, three by submission and one on a decision. It was his run in UFC which saw him star in an episode of Friends in 1997. Appearing as a UFC fighter, he defeated the character Pete Becker, who was dating Monica Gellar in the show.

In 1999, Abbott joined WCW, initially brought in as an opponent for Goldberg, who was on his hot streak at the time. However, the feud never materialised. Ahead of the 2000 ‘Souled Out’ PPV, former WWE writer and then current WCW writer Vince Russo was given the responsibility to crown a new WCW champion at the event, owing to both the current champion Bret Hart and Jeff Jarrett being on the shelf. To the surprise of virtually everyone, Russo suggested Abbott as a contender. The notion was blocked and Russo was released. In the end, Chris Benoit would win the title on that show whilst Abbott was relegated to facing Jerry Lynn, in a match he won. Soon after, he began a programme with the boy band stable 3 Count, with the shtick being he was their biggest fan. The programme ended when he was released from the company.

He returned to the octagon in 2003, fighting through to 2013. Following a match at ‘King of the Cage: Fighting Legends’, after defeating Ruben ‘Warpath’ Villareal by a TKO, Abbott said, as he was leaving the cage, that he was “starting to feel a little old.”

Three years later, in March 2016, Abbott was expected to face fellow MMA veteran Dan Severn for the upstart UR Fight promotion. However, the contest was cancelled the day prior to the event as Abbott could not pass the required medical tests.

As for now? Well, in the same interview he said: “I’ve been out of commission a little bit. I’m getting fired up again to go out and do things that I love to do, my passion. And that is to kick ass.” We wish him well on his recovery and in what ever pursuit it is that he feels he can still “kick ass”.

You can read all previous ‘Whatever Happened to’ pieces here.

One thought on “Whatever Happened to Tank Abbott”