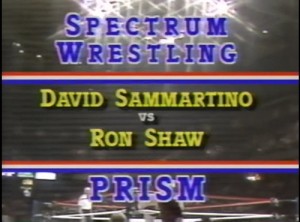 It’s not often that a nothing house show features an unspectacular match-up that still gets talked about. But that’s exactly the outcome of the match pitting David Sammartino against Ron Shaw at the Philadelphia Spectrum in late 1985 and is the focus of this latest piece from Brian Damage.

It was 1985 and as per usual during that time period…the World Wrestling Federation aired a local televised house show in Philadelphia, Pennsylvania on the Prism network. The card itself was a rather unspectacular one. It featured the likes of King Tonga vs. Moondog Spot…Hillbilly Jim Vs. Big John Studd….The Hart Foundation Vs. Uncle Elmer and Cousin Junior…Corporal Kirchner Vs. Barry O and Andre the Giant Vs. King Kong Bundy.

Nothing about those matches were worth talking about…except one. One that had the Spectrum buzzing that night and is still talked about to this day. Incidentally, the match was a preliminary match that featured a WWF journey man named Big Ron Shaw and his opponent that evening was the much heralded second generation wrestler named David Sammartino..son of the ‘Living Legend’ Bruno Sammartino. 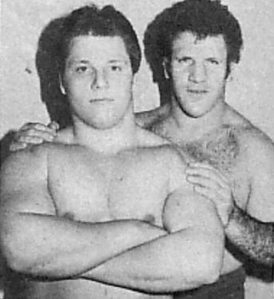 While Ron Shaw was always considered a reliable hand for the WWF throughout the years…making others around him look good….there is the interesting case study of David Sammartino. Initially, when David debuted in the WWF back in 1984, he was shot right up the ladder of the promotion. He had a spot in the inaugural Wrestlemania…going to a double DQ with Brutus Beefcake and was featured in main events on shows where he teamed with his legendary father.

The thing is, when David wasn’t main eventing with his dad…he was used on the bottom of the card. It became painfully aware to anyone paying attention..including the Sammartinos…that David was being used by the WWF to get Bruno to come out of retirement and wrestle. That was exactly the case, as Vince McMahon Jr. was expanding his company nationally and still saw that the much older Sammartino was still a draw wherever he went.

Bruno, was not at all happy with the WWF using his son to get to him and a rift began to form between Bruno and Vince. David wasn’t exactly quiet on the issue either as he himself voiced his displeasures about not getting a fair shake with the promotion. David, who became increasingly upset about the way he was being used…quit the company on multiple occasions…only to return later.

Now back to that faithful night in November of 1985. It was the week before Thanksgiving and the WWF was getting in on all their house shows commitments before the holiday. David entered the ring to a rather lukewarm reception…fans were anticipating a quick squash match against the perennial “loser” named Ron Shaw. 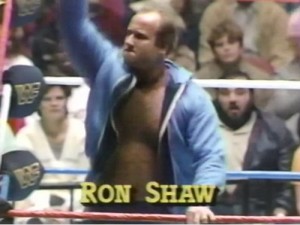 It was a squash match, just not exactly what we were expecting. From the opening bell, Shaw got the upper hand with kicks, fore arm smashes and body slams. Shaw even made a cover on the lifeless Sammartino and before the referee could count to three…you could see a rather confused Shaw pull up his opponent. The announcers for the event, Gorilla Monsoon and Dick Graham made sure to point that out as Shaw being arrogant…but in reality it seemed to be an all around confusing situation. 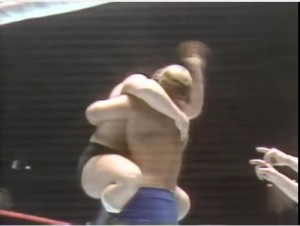 As fans waited for the traditional baby face comeback…it never happened. Ron Shaw applied a bear hug (Bruno Sammartino’s finishing move) and within a second…David Sammartino quickly and obviously submitted. It seemed everybody in the ring including Ron Shaw, the referee Dusty Feldbaumer and the ring announcer Mel Phillips all were confused and didn’t know how to proceed. It took a while for Mel Phillips to announce Shaw as the winner of the match and Felbaumer to raise Shaw’s arm in victory. 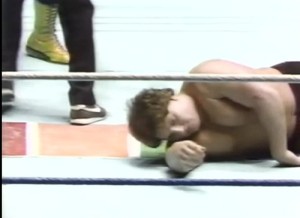 The fans in attendance were just as shocked, as there were clear chants of “Bullshit!” ringing from the rafters. (Hey, even though this was 1985…they were still Philly fans who call it like they see it.) Monsoon (who was a good friend of Bruno Sammartino) tried his best on commentary to try and make sense of the situation. He said things like…”David Sammartino never submitted.” and “David is a tough kid and never gave up in his entire life.” Despite Monsoon’s best efforts…it was painfully clear Sammartino submitted. So what happened?

Years after this incident was dubbed, “The Phantom Submission Match,” David admitted he threw the match…but why? According to him, he was fed up with the politics of Vince Jr. and wanted to say a big FU to McMahon who he deemed “arrogant.” When Ron Shaw was asked the same question years later…all Ron did was smirk and say…”That went well.”

Believe it or not, it wasn’t the death knell to David’s WWF career. Oh sure, after that incident he disappeared for a bit again…but eventually did return briefly in 1988. Some say in this scripted world of professional wrestling…that was one of the biggest upsets in WWE history. Regardless, what we do know this wasn’t a Vince screw job. It was just David screwing David.

4 thoughts on “A Moment in Time: The Phantom Submission Match”