Who doesn’t love a good wedding? In the World Wrestling Federation there were a plenty. Some good, some bad and some just plain memorable. On November 29th, 1999, we were all “blessed” with an invitation to witness the holy matrimony of WWF superstar Test and Vincent Kennedy McMahon’s only daughter…Stephanie. It was a match made in heaven, or so we thought.In other words, just another typical WWF style wedding.

Stephanie was the boss’ daughter who was closely guarded by the rest of the McMahon family…in particular her older brother Shane. Shane was completely against Test and Stephanie as a couple. So much so, he challenged Test to a “Love her or Leave her” match at Summerslam ’99. If Shane won, Test would be forced to split up with Stephanie…if Test won….Shane would give his blessing to the relationship. 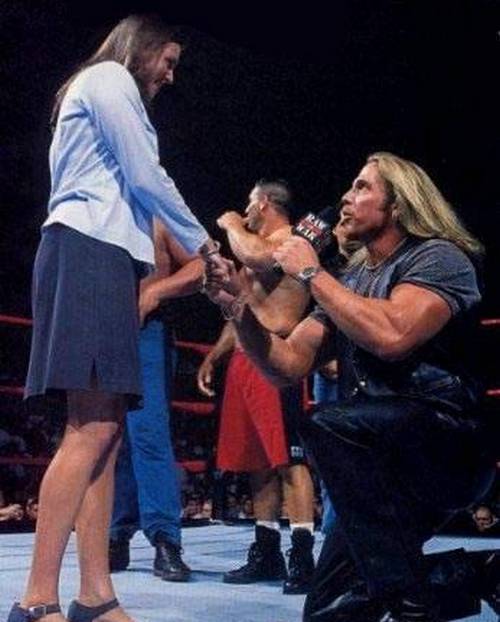 As expected, Test won the match and on the very first episode of Smackdown…he proposed to Stephanie McMahon. The wedding was set for November 29th of that year to be televised on Monday Night Raw (of course). Leading up to the big event, Test had a bachelor party and Stephanie had her bachelorette party in Las Vegas, Nevada. It was shown Stephanie doing repeated shots, while a male stripper danced for her and her friends attending.

The day of the wedding was finally upon us at the Staples Center in Los Angeles, California. As the couple gazed lovingly into each other’s eyes….Triple H appeared at the arena to interrupt the festivities. He then proceeded to show Triple H driving around to a drive thru wedding chapel with an unconscious Stephanie McMahon in the passenger’s seat. Triple H and Stephanie became a married couple unbeknownst to Stephanie or anybody else. 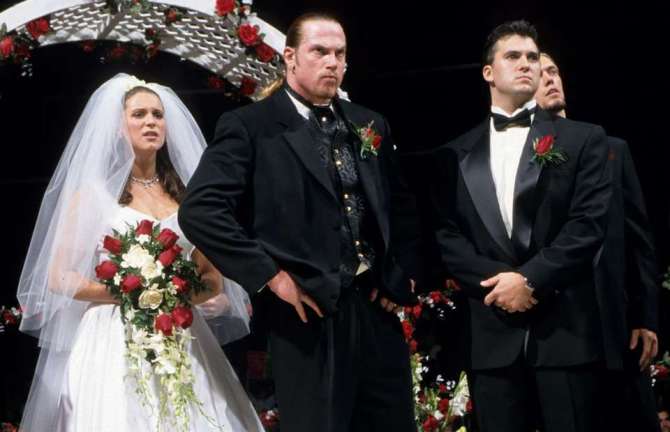 As Stephanie was screaming and in tears, Triple H called Vince McMahon “Dad” and asked a the McMahon family a question. The question was not “if” he and Stephanie consummated the marriage…but how many times? As Stephanie cried in her father’s arms, an irate Test ran after Triple H.

Of course, the rest of the story had Vince McMahon himself challenge Triple H to a street fight and Stephanie turning heel and aligning with Triple H. Together they formed the McMahon Helmsley regime which ran roughshod over the WWE for over two years. Test would be relegated to mid card status for the remainder of his WWE career. According to Vince Russo and Ed Ferrara (the men that created that storyline) that was not the original plan at all. 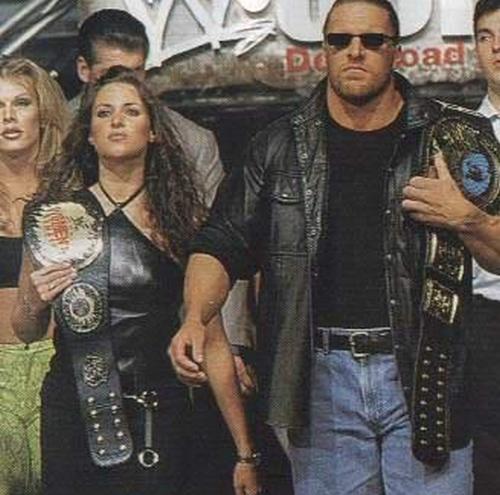 The original idea was to have Test be the one to turn heel on Stephanie and feud with the McMahon family…elevating his career. Vince didn’t feel Test was ready for that top spot and changed it to Triple H. Test did eventually become a heel later in 2000 when he teamed with Albert and Trish Stratus to form T and A. The rest is history…

7 thoughts on “The Wedding of the Century: Andrew ‘Test’ Martin and Stephanie McMahon”