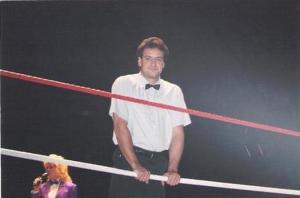 ‘A Moment in Time‘ returns to the blog as Brian looks at the passing of Joey Marella, the WWF referee and son of WWE Hall of Famer Gorilla Monsoon.

Through the years, World Wrestling Entertainment has been filled with many tragedies…whether it be the sudden deaths of Brian Pillman, Owen Hart, Eddie Guerrero etc…It has at times, sadly become somewhat commonplace to hear or read about a wrestler’s untimely death. It doesn’t make them less shocking or sad, just a part of the culture of sacrificing health and well being for the entertainment of fans.

This is the story of WWF referee Joey Marella. Joey was the adopted son of the beloved Robert “Gorilla Monsoon” Marella. Monsoon was a wrestler/road agent/announcer for the WWF for many years.

Make no mistake about it…Joey Marella got his foot in the door because of his father…but had to work twice as hard to prove himself worthy to stay. According to his friend and former referee Jimmy Korderas…Joey started out as a member of the ring crew when the WWF came to New Jersey (Marella’s hometown) He would set up and tear down the ring, carry equipment and be a gofer for the talent. Eventually, he began officiating local matches, until finally becoming a permanent part of the WWF officiating crew.

Joey Marella would be the referee for some of the WWF’s biggest matches including Hulk Hogan Vs Andre the Giant at Wrestlemania III and the Bret Hart vs Davey Boy Smith match at Wembley Stadium at Summerslam. While on camera, Gorilla Monsoon would…at times..be critical of Joey’s officiating…in reality..Gorilla was as happy as anyone that he got to spend so much time on the road with his son. According to Gorilla’s close friend and colleague Bobby “The Brain” Heenan, Gorilla got to make up for all the time lost during Joey’s childhood because of his wrestling career. 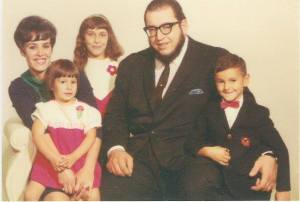 Everything changed for the Marella family and the WWF in the early morning hours of July 4th, 1994. After a series of television tapings in Ocean City, Maryland…Joey and WWF manager Bruno “Harvey Wippleman” Lauer were headed for a show in Newark, New Jersey. While traveling on the New Jersey Turnpike, Marella fell asleep and their car ran off the road, smashing through a guardrail and hitting a tree. According to reports, Joey Marella was not wearing a seat belt at the time of the crash. Bruno Lauer was and that in fact saved his life.

According to Bruno Lauer…after the crash…there was nothing but eery silence. Lauer asked Joey if he was dead. When Joey didn’t answer, Lauer asked again, “Joey are you dead?!?” It was then that Lauer realized that Joey had died from the impact of the crash. He was just 31 years old.

In the following weeks after Joey Marella’s death, the WWF acknowledged Joey’s death with a video and published an article in the WWF magazine. As for his Dad, according to several….Gorilla Monsoon was never the same. His heart just wasn’t into the business anymore and his appearances became less and less frequent. Gorilla’s health began to deteriorate and a few years after his son’s death in 1999…Gorilla Monsoon passed away at age 62. Some might say…of a broken heart.

While the impact of Joey Marella’s death resonated throughout the WWE for years…it does have somewhat of a silver lining. It forced the WWE to become more vigilant to wrestlers traveling schedules. It was then made mandatory that all personnel MUST check into a hotel if working late nights. All personnel couldn’t travel alone and all people in vehicle must unanimously agree to travel if they feel up to it. On the other side of that, longtime friend and WWE ring announcer…Tony Chimel named his son Joey in honor of Marella. Joey’s sister Valerie had twin boys and named both in honor of her Dad and brother…Joey and Gino respectively. 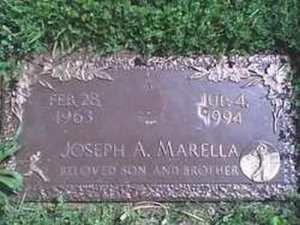 7 thoughts on “A Moment In Time: The Death of WWF Referee Joey Marella”